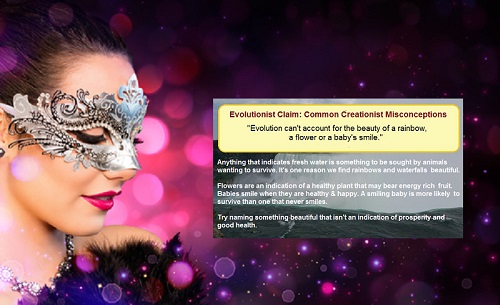 Okay boys and girls this time we will unmask the mistakes behind this meme which tries to explain away all the beauty inherent in God’s good creation. Here’s a closer look: 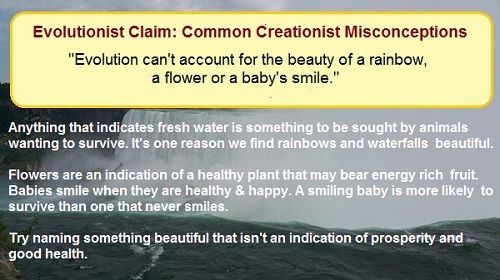 This meme foolishly uses a technique of misdirection, challenging you to come up with items of beauty that evolution can’t explain. The goal: to pre-sell you on the idea that any instance of beauty you come up with will display some “evolutionary benefit” as they like to call it. But it’s a failed gambit. First because as we’ll see evolution cannot explain beauty; but on the other hand beauty is evidence of God. Second because the meme is based on a number of related, and easily identified logical fallacies: Selective Attention and Suppressed Evidence among them. Call it what you will, they are all forms of misdirection. However once examples of beauty are given that provide no evolutionary benefit, it’s painfully clear how silly and vacuous the argument is. Consider:

Who will argue the beauty of Saturn, backlit by the sun as seen from Cassini?

Or the beauty of the recent eclipse that crossed the US: 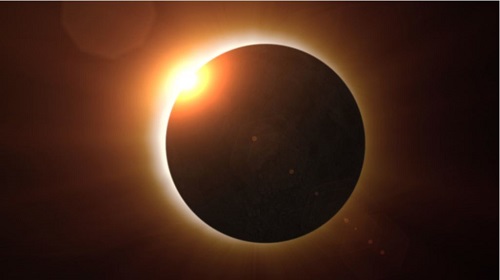 Mathematicians will tell you that certain equations, like Einstein’s theory of relativity are beautiful[1]: 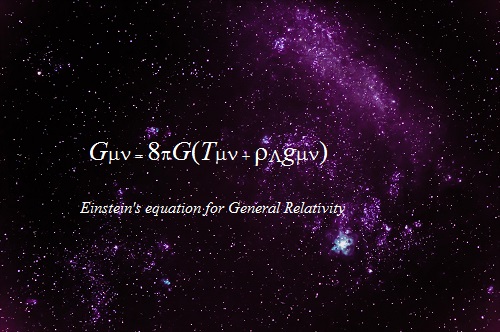 So now the evolutionist must answer how an appreciation of any of the above and particularly the abstract concept of mathematical equations will help you to survive by preventing you from being eaten by a lion or a tiger or bear or some other wild beast? In fact one could argue that standing still in awe as you watch an eclipse could make you an easier target for wild beasts during an eclipse than others creatures without an appreciation of such beauty;  and therefore lower your chance of survival. Thus, such appreciation for beauty would be an evolutionary disadvantage and would be eliminated by natural selection along with the poor creation subject to the vagarities of natural selection.

Which points to three conclusions that kill any hope of evolution having power to explain the origin and application of abstract concepts like “beauty.”

2. The fact that beauty can be found in abstract, non-physical entities like math equations above, or poetry below point to the fact that evolution has absolutely nothing to do with the origin or appreciation of beauty. Evolution cannot create anything – it can only eliminate traits that are not needed. This inability to create is particularly true of non-physical entities like logic, morality, codes and beauty. So just as evolution cannot explain the origin of language which is symbolic in nature[3], neither can it explain the origin of an appreciation of things that consist of non-material concepts of the mind.

3. Since many things are considered “beautiful” yet provide no evolutionary benefit, that suggests another question evolution can’t answer: Why are some things seen as “beautiful” while others are not? This is akin to the question of morality – why are some things moral and some things are not? For example, why is murder wrong – especially if it will eliminate competition for your food source? As far as evolution is concerned, that would be a benefit. Evolution cannot explain why murder is wrong.[4] (Not just why you shouldn’t do it – so you’re not caught and stopped from reproducing – but why it is actually wrong, an evil thing to do.)

The answer to the question of why are some things beautiful while others are not – particularly when they provide no evolutionary benefit – is simple: Beauty is often an element of design. Thus the designer has given us an ability to appreciate the beauty he’s built into his creation. So when you recognize beauty, you are recognizing the care, love and exquisite craftsmanship God has built into his creation.  You are recognizing how he was manipulated abstract elements like form, patterns, sequence and symmetry to create things that don’t happen by chance; but whose existence show the care of a loving creator. Such ability to recognize beauty is no accident, it was put there by the design and purpose of a loving creator. Thus the argument for the existence of God based on beauty (the argument from beauty)  is a special case of the argument from design. That’s why particle physicist and Anglican priest John Polkinghorne can say, “I think that when we encounter very deep beauty, whether it’s beauty in music or something like that, or whether it’s beauty in the scientific account of the order and fruitfulness of the world, then it’s difficult for us not think there’s some mind and purpose behind it.”[5] It’s also why we don’t attribute the beauty such as from music or math to random processes.

Before I close I leave you with one more example of beauty evolution can’t explain – poetry.  The poem below, though told by a character from Shakespeare, is not a work of Shakespeare it is my own. But I trust some will find some beauty in it. And even if not; it points to a world of literature by the bard himself – poems and plays that literary scholars call among the most beautiful ever produced. A word of caution however: If you ever find yourself thrown to the wild beasts in an arena, or in a literal sea full of sharks, be warned: being able to recognize the beauty in such poetry will not help your chances of survival against the wild beasts – regardless of what the evolutionists tell  you.

Come dear reader, come now with me
Open your eyes, and surely you’ll see
A wee little truth, soon to be revealed
A whopping bold lie, which can’t be concealed

Yes come walk with me, don’t dither, don’t duck
‘Cause I’m a gentle and truthful winged Puck
Now whisper I will without further ado
That wee little truth we all know to be true

Birds spring from birds, bees rise from bees
All born from their kind, this we all see
Great apes, common men, they share no great dance
Not one tree but from many, grow each of the branches

Through stories called science they try to convince
But when you deny, they’ll call you quite dense
Now truth has been told, good Puck takes to wing
And as I depart, from your voice let it ring

We’ve all been created, that can’t be denied
And Darwin’s great tale is naught but a lie 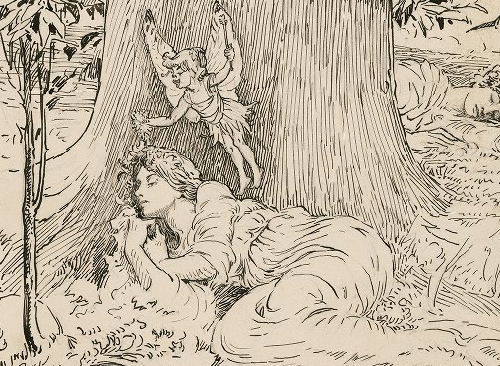 This is the fifth in the Series “Unmasking Mistakes in Memes of Evolution”
The Others:

A list of the problems with evolution promoting memes that have been debunked thus far can be found at meme mistakes here. You can send me a request to debunk an evolutionary meme here.

2.  Here I’m speaking of macro-evolution, molecules to man evolution, bacterial to biologist evolution. Evolutionists will try to claim evolution has been observed, but they’re speaking of micro-evolution – mere variation – like the changes in the size of finch beaks that Darwin observed. That is not the evolution in view here. For more on the difference between micro and macroevolution, see my article, “Microevolution – Dispelling the Myths and Misconceptions”, https://rationalfaith.com/2016/08/microevolution-dispelling-the-myths-and-misconceptions/
Back

4.  For more on evolution’s problem with morality, see my article: “The Moral Argument – Revealer of Hypocrites”,  https://rationalfaith.com/2017/04/the-moral-argument-revealer-of-hypocrites/