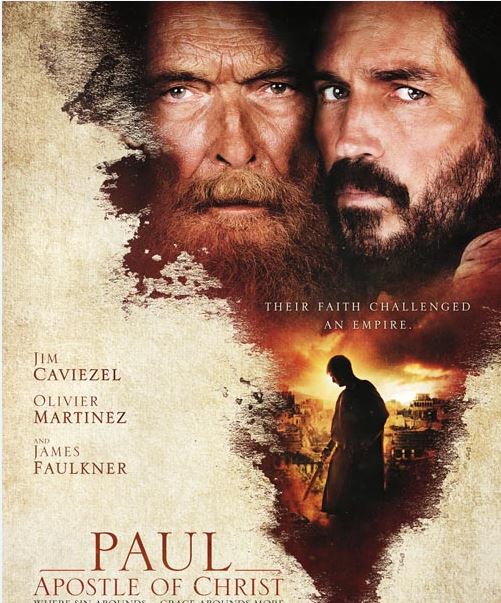 It’s AD 67,  some 34 to 37 years after the crucifixion of Christ. Nero, emperor of Rome has recently burned half the city in order to rebuild it according to his tastes. To cover his crime Nero scapegoats all Christians, and as the historian Tacitus tells us, Nero arrests, tries and convicts them not of arson, but of “hatred of the human race,” and puts them to death by “methods calculated to provide lurid entertainment for the public.”[1] Paul, the apostle of Christ is a key figure in the Christian faith and community. As such, Nero holds the Apostle Paul directly responsible for the fire, considering him the “chief enemy of Rome.”

Consequently when the movie opens we find the Apostle in prison awaiting his fate.  Luke, the physician and writer of the Gospel of the same name, and the Acts of the Apostles (commonly known as Acts) arrives in the city with a mission to save and retrieve the last of the writings of the apostle, determined that such important words not be lost.

It is into this cold, harsh reality that the movie opens.  Since the physician Luke is determined to rescue the writings of Paul, he figures prominently in the movie. But if you are expecting to see a movie chronicling the life of Paul and his missionary journeys in a manner similar to how Luke chronicles the Acts of the Apostles, you will be disappointed. This movie focuses on Paul’s final imprisonment in Rome which provides an opportunity to examine the heart of Paul’s gospel – the Grace of Jesus Christ and other deep truths of the faith – and eschews the trend in popular movies to rely on action scenes or superb CGI effects to maintain interest.

How do you behave in a society that reviles you, and the government openly persecutes  you?

What to do in the face of persecution? Stay and witness, or flee and make a new start elsewhere?

How do you know that what you believe is the truth?

Why is God silent in the face of such great evil? Does he hear our prayers?

What to do when a loved one is wrongly imprisoned and faces death?  Is it okay to take up arms and rebel in such situations?

What do you do when you’re facing death for your faith?

Actually that last question is not a question often confronted by people in the United States, but Christians are being persecuted and dying for their faith around the world as you can read about here and here. If you think such things couldn’t happen in the USA you have not understood the message of Genesis or Revelation.

It is within the context of persecution and challenges to the faith that Paul’s gospel of grace shines most clearly. After the movie takes a sufficient amount of time presenting the darkness of the age, we begin to see the philosophy of the grace of Christ in the words of Paul shining through the darkness as they’re woven throughout the various interactions Paul has. We see a man who has been thoroughly transformed by Christ on the Damascus road (Acts 9.1-9), going from a persecutor of the church, to the primary promoter of the church, who refuses to wage war with weapons as the world does, refusing to lift even “a finger” against his opposition. Instead his weapons are his words, which are imbued with divine power when they are the message of the gospel. (2 Cor 10.3-5)

And in those words spoken in this movie, you will find either echoes of, or direct references to many of Paul’s writings. Following are some of the scriptures in the movie referenced either directly (quoted verbatim) or indirectly (not quoted but recognizable) which are spoken by Paul (mostly) or other Christians in the movie:

Those are references from letters by Paul. Additionally many other scriptures are alluded to:

Clearly this film has much to say about Paul and his message, and living the gospel. So if you want a deeper understanding of the faith, and of Paul, and the persecution the early church suffered through, and examples of how a Christian is supposed to live through it, and an example of how to live a life by grace through faith (Ep 2.8), (and conversely, how not to), this film is highly recommended.

If on the other hand you’re merely looking for an action film, you will probably be happier going to see the recent Samson movie, which features all the ingredients of an action adventure, including a hero with superhuman strength, a beautiful temptress, a calculating self absorbed king, and a wicked usurper you’ll love to hate. And they tell the story of Samson reasonably close to the Biblical account, making few excursions for artistic license.

So there you have it: Paul, Apostle of Christ does not give you the entire life story of Paul; but it does enlighten you on the message of Paul – the message of undying devotion to the Gospel of grace through faith in Christ. If that’s what you’re looking for, you won’t be disappointed.

2. Paul mentions his failing eyesight; Bible scholars suspect Paul had a problem with his eyes, this verse is one of the reasons for the suspicion.
Back

3. In the movie – words to the effect, “Everything I did, I did for Christ.”
Back

4. Timothy mentioned to be in Ephesus by Aquila and Priscilla as they discuss options on  where to go.
Back