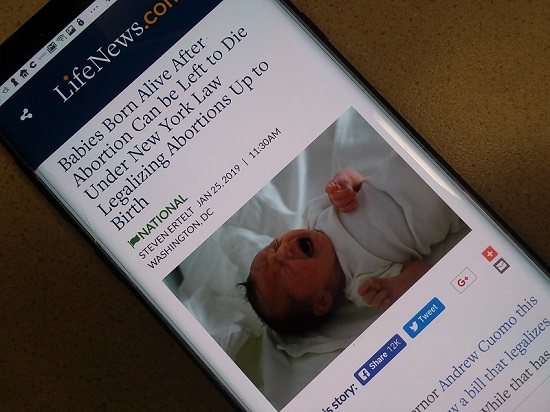 This new law – The Reproductive Health Act (RHA) is so radical, so diabolical that even babies who managed to survive an abortion are not safe. No, this new law allows women and medical professionals who should be caring for newborns – helping them to live – to instead neglect them and assure they die.[2] Make no mistake: this new law is evil.  If you have any doubts about that consider the following:

This law uses the approach of Hitler to Murder: Declare people to be non-humans.

How did Hitler get the German people to go along with the murder of millions of Jews? One of his tactics: he declared them to be non-humans.  Only humans can be murdered. The German supreme court “refused to recognize Jews living in Germany as ‘persons’ in the legal sense.”[3] Since they were not human persons, they could legally be killed, which when it’s premeditated and unlawful, is murder. But only if you’re dealing with a human. This new New York law defines a human person as someone who has been born, and who is alive.[4] Thus if a baby is born dead, it is not a human, and thus could not have been murdered.  This is why during late term abortions, they kill the baby first, then deliver a dead person – who they’ve defined to be not-human because they were dead when born. Congratulations New York, you’ve sunk to the depth of using the tactics of Adolf Hitler to kill the innocent.

This law allows babies to be killed that could have been saved.

The Roman Empire in its final days is well known for its decadent and decreasing morals along with increasing levels of sin, vice and wickedness among the emperors – some of whose practices were imitated by the people. I could speak about the Roman practice of exposing babies – an early form of abortion for controlling family size, but since we already have abortion on demand[5] in this country and this law is past that,  let me provide a more suitable example. Let us consider the case of Tiberius Cesar and his successor Gaius Caligula. Though Tiberius is recognized as a great Roman General he was also a pedophile in his later years. Tiberius would take young children so he could put them in the bath (which he took in a pool) with him. He called the children “minnows” because as he bathed he would have the children swim around in the water and stimulate him. The historian Tacitus tells us that when Tiberius bored of his “minnows” he would throw them off a thousand foot cliff near his villa to the jagged rocks below. And though that’s gruesome, wicked and evil I haven’t gotten to the point yet.

Since Tiberius kept a ready supply of “minnows” always on hand so some were alive at the time of his death. Since those lucky ones had evaded the certain death of the cliff, you’d think they’d survive to live a regular life right? Unfortunately not. His successor, the vile Caligula gets rid of Tiberius’ minnows – “not by giving them freedom, not by letting them off their sex, but by drowning them. They’re killed…”[6]  Now here’s the point: Caligula didn’t have to kill the children. He could have let them live and set them free. The fact that he did not and instead had them killed is just plain evil.  The same goes for the behavior allowed by this new law which approaches the vileness of Caligula. Babies born alive after a botched abortion don’t have to be cared for. They can be left to die. In effect, killing them – leaving them to die of exposure like the early Romans. The fact that they are killed shows the murderous intent and actions of all involved. Again, that is just plain evil.

How could this be? Aren’t babies born alive legally human?  Yes morally and scientifically they’re human before and after birth. And legally, if they survive and are alive outside the womb, they are now legally human.  Which just goes to show the wicked hypocrisy and evil intent of the law makers as expressed in this law. Babies who survive the abortion and are now legally human are still allowed to be legally killed through neglect. That is simply evil.  How much clearer can it be that abortion doesn’t just remove a “clump of cells” – it kills a human being? And that with premeditated murderous intent.

That abortion kills a human being is true for all abortions, but it’s especially true for late term abortions. Because in case you didn’t know, a late term abortion requires you kill the baby first, then the mother goes through the labor and delivery process to deliver a dead baby. As Live Action president and tireless pro-life crusader Lila Rose and others have pointed out, why must the baby be killed first? Why not just deliver a live baby and put it up for adoption? 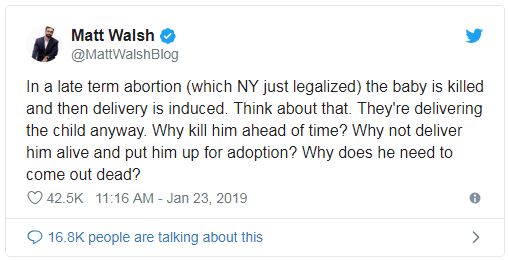 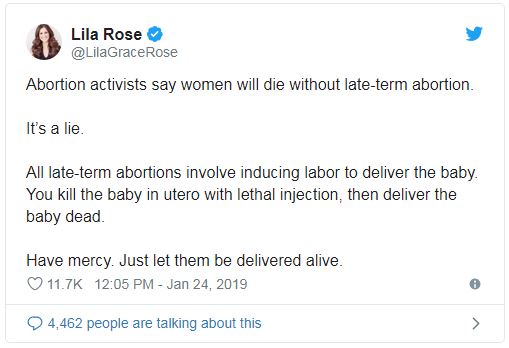 But instead of choosing life (Deut 30:19), many women  – supported by many men and the entire pro-abortion  movement are emboldened to choose death, indeed they’re adamant about the fact that they have a “right” to kill babies.

Why do they claim such a right? A myriad of reasons that boil down to selfishness, lack of empathy and a failure to obey the second greatest command: to love your neighbor as yourself. (Matt 22.39) Thus there remains but one question: now that New Yorkers have demanded and obtained the right to kill fully viable babies – even when they survive an abortion and are alive outside the womb, who’s next? The elderly? The disabled? In could be anyone who they feel is infringing on their right to be free from any and all responsibility to another person.

Because of this attitude, this society increasingly calls evil good, and good evil. For that – woes are coming upon this country, a county which not only encourages this vile practice but  also supports it through the immoral funding of the primary provider of abortion Planned Parenthood. And not being content with that insists on trying to export the vile practice to other countries – though to his credit President Trump has worked to limit the practice.  The Lord has a word for all those deceived into thinking a woman has a “right” to kill a baby in her womb (or out):

“Woe to those who call evil good and good evil, who put darkness for light and light for darkness, who put bitter for sweet and sweet for bitter.”
(Is 5:20)

2. Steven Ertelt, “Babies Born Alive After Abortion Can be Left to Die Under New York Law Legalizing Abortions Up To Birth”, Life News, Jan 25, 2019, https://www.lifenews.com/2019/01/25/new-york-law-legalizing-abortions-up-to-birth-revokes-medical-care-for-babies-born-alive-after-abortions/
Back

The word “evil” is used far too often (according to one criminal cyberstalker, I am “evil” for exposing his logical fallacies and hypocrisy), but the word is appropriate here. Women can’t control their lusts, get pregnant, and willingly commit murder. I am ashamed to live in New York, and I believe we are under God’s judgement, Romans 1:24 says “God gave them over”. In other words, “Have it your way…” Should we leave? It would only be a delay. Like in Genesis 6:5, “Then the LORD saw that the wickedness of man was great on the earth, and that every… Read more »