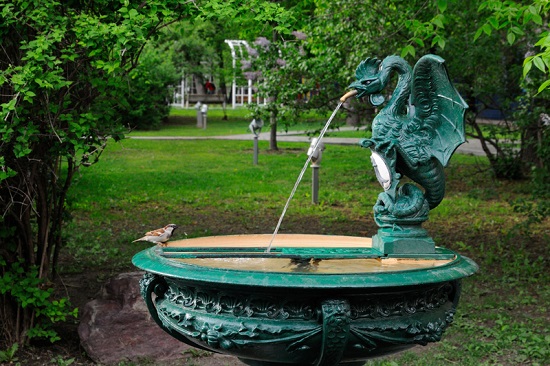 So what’s going on here? Is the Bible really referring to the mythical beast, a winged serpent with a rooster’s head and deadly gaze, hatched from a cock’s egg? Or is something else going on? With a little history and some good dictionaries, it’s easy to see both the intent of the word (a poisonous viper such as an asp or Egyptian cobra), and a likely reason why those more common words weren’t used.

The Cockatrice according to Legend

Legend has it that the:

“Cockatrice, also called basilisk, in the legends of Hellenistic and Roman times, a small serpent, possibly the Egyptian cobra, known as a basilikos (“kinglet”) and credited with powers of destroying all animal and vegetable life by its mere look or breath. Only the weasel, which secreted a venom deadly to the cockatrice, was safe from its powers.

By the beginning of the 17th century more marvels had been added to the legend. The snake was said to be generated from an egg laid by a cock and hatched by a serpent. In addition to the weasel, another enemy was the cock; if the basilisk heard a cock crow, it would shortly die. Thus travelers in regions allegedly infested by the basilisk took cocks with them.”[2]

But is that what the Bible means? Clearly not! One need merely follow the cardinal rule of interpretation: context determines meaning – to see that. So let’s look at the context we see the word in when it appears in the Bible.

The Biblical use of “Cockatrice”

“And the sucking child shall play on the hole of the asp, and the weaned child shall put his hand on the cockatrice’ den.“
(Isa 11:8 KJV)

The word translated “cockatrice” is, in Hebrew the word (צפעוני – Tsephonee). All the Hebrew lexicons consulted indicate the word means a viper or a poisonous serpent.  Immediately we see the parallel idea – Hebrew rhyme – with the word “asp” (פתן- Pethen) – asp or cobra. So already we see from the parallel ideas – that what is being communicated in both cases is a poisonous snake.  If you have any question that the Bible is speaking of a poisonous snake in both instances you need merely consult the Greek Translation of the Old testament, called the Septuagint (signified by LXX). The Septuagint is about 1200-1300 years older than our Hebrew Bible (which is based on the Masoretic Text) and provides additional context for the Hebrew text. It uses a single word for both creatures: ασπιδων (aspidōn) –  asp or Egyptian cobra. Clearly the idea in view is that of a poisonous snake, not a mythical creature.

Since that is the case, why didn’t the translators just translate it as “viper” – the core meaning of the word? For those of us not familiar with vipers the BDB lexicon gives us a hint: the word behind cockatrice:  צפעוני  – Tsephonee means “a venomous viper, but vipers do not lay eggs”[3] Apparently the KJV translators were aware that most vipers don’t lay eggs, but were unaware that some vipers do indeed lay eggs.[4] Here I’m speculating, but it seems likely that the KJV translators saw the mention of a “den” in verse 8 as indicative of an egg laying species. And trying to avoid the untrue accusation that the bible is inaccurate because it speaks of egg laying vipers when egg laying vipers were not known at the time, they endeavored to find a different word that means “a poisonous snake hatched from eggs.”

They found such a word: cockatrice. Unfortunately our modern dictionaries don’t reflect that usage. Webster’s online dictionary lists it as “a legendary serpent that is hatched by a reptile from a cock’s egg and that has a deadly glance.”[5] Even the earlier 1988 edition of  Webster’s Dictionary, The New Lexicon of the English Language for cockatrice simply lists “a fabulous monster (*BASILISK)”.  To find previous meanings of the word, we’ll need to go further back.  Fortunately I have an even older version of Webster’s from 1956.[6] It’s one of those expansive picture dictionaries so let me show you the entry that this old, yellowing dictionary has for cockatrice (complete with picture): 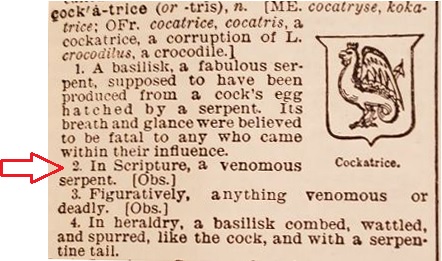 Notice sense/meaning 2: “In Scripture, a venomous serpent“. Precisely as the Biblical text intends. Note the “Obs” in brackets. That means “obsolete” as in “no longer in use”. So obsolete now that current editions of Websters don’t even report the meaning anymore.  Given both the mythical and literal meanings,  it doesn’t take much imagination to see how sense/meaning 3 came about, namely “figurative, anything venomous or deadly.” It appears that the word cockatrice came to be synonymous with anything with deadly venom, just as “Benedict Arnold” is synonymous with traitor, or “Einstein” is synonymous with genius.

Words can change meaning over time. That is why we continually have new dictionaries and new translations of the Bible – to translate the Biblical text into the language as it is currently used.  There is no reason to believe that the translators of the King James version had anything in mind other than a venomous serpent that lays eggs when they used the word “cockatrice.”  For those who are interested in the truth, they take seriously the admonition of scripture to “Do your best to present yourself to God as one approved, a workman who does not need to be ashamed and who correctly handles the word of truth.” (2 Tim 2.15)(emphasis mine)  Such will search out the truth and seek to correctly understand the word of God – even the difficult passages. But those whose agenda is to discredit or disprove the Bible look for mistakes, or errors or ways to misunderstand the text. Such want to see fantastic, mythical creatures instead of the creatures God created during the creation week, so they can mock. Unfortunately for them, they will get no such satisfaction. All they will find in the word of God is truth. (John 17.17)

A Note in Passing

Legend has it that Cleopatra – the last queen of Egypt – committed suicide by allowing herself to be bitten by an Egyptian cobra or asp. While that theory is doubted today[7] I mention it because an Egyptian cobra or asp could be in view here. The main point being it was understood to be deadly. Deadly enough – according to the legend – for Cleopatra to kill herself and 2 of her servant girls with its venom.

And what does God do with this poisonous creature when all things are made new? When Jesus returns He makes such poisonous creatures safe enough for a child to put a hand in its den and not be harmed by it. For as the very next verse says:

They shall not hurt nor destroy in all my holy mountain: for the earth shall be full of the knowledge of the LORD, as the waters cover the sea.
Is 11.9

So at the return of Jesus we see the undoing of the curse.  Killing, the poison of snakes, all the corrupted things of the old order are put away and humans and animals alike will live in harmony – for all will be “full of the knowledge of the Lord.”  Those who put their trust in Jesus are you looking forward to that day. Are you one of them?

7. There are a lot of articles that talk about why Cleopatra probably didn’t die from self inflicted snake bites, here’s one with a video. Why Cleopatra Probably Didn’t Kill Herself With A Snake
Back

Images
All images used by permission
Featured: sparrow drinking from a fountain in the form of a basilisk © Oksanavg | Dreamstime.com used  by permission