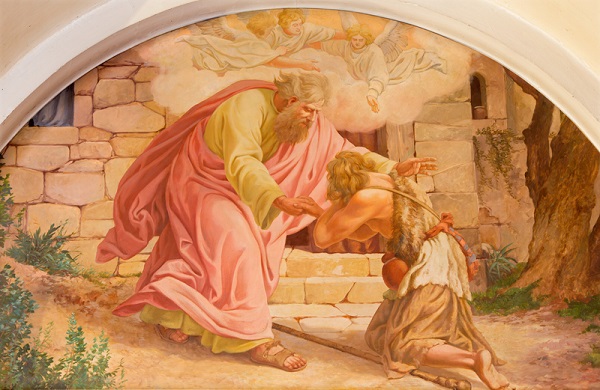 The Father runs to the returning prodigal

Since Jesus, the son of God, is the key to salvation, we started with him and spent the first two articles in this series looking at who he is, and just as importantly, who he isn’t. The picture we have of Jesus is very clear: starting with the creed of the Christian faith:

Indeed he is both Lord and Christ (or Messiah) (Acts 2.36)
This is the central creed of Christianity.

But we have further statements that help clarify who Jesus is:
Jesus is the one who:

There is an implicit understanding in each of these statements. Namely that there is one who has bestowed these rights and titles on Jesus.

It is the one who is glorified on the day when every knee will bow to Jesus and every tongue confesses “Jesus Christ is Lord.” The person[1] so glorified is God the father. (Php 2.11)

If the Father is able to give (or do) all these things, clearly they are all his to give or do. Indeed this is confessed every time the Nicene Creed is recited, since it begins:

We believe in one God, the Father almighty,

The almighty Father possesses all these things and is able to do all these things. That truth is unquestioned. But more importantly, God the Father is not concerned to grasp these things – to hold on to them for himself alone. Much like Christ himself – (Php 2.6) the Father has freely given them to the Son so:

No doubt this is why Jesus can pray:

For neither the Father nor the Son claims to possess any divine attribute that the other does not also possess.

But this brings us back to the question: if they both share in the divine essence as both the Nicene Creed and the definition of Chalcedon[2] confirm, who is this Father who is so concerned that all beings (whether human, angel or any other creation) honor the Son even as they honor him? Or to put it succinctly: Who is God the Father?

Who is God the Father?

He is, as his name implies, first and foremost Father. He is more than just a father figure. That he is father is indeed an integral part of his nature. As one theologian put it:

And so as we read through scripture, that inherent nature is seen time and time again. The picture that is most impressed upon us concerning the first person of the trinity, reveal the characteristics of a father. These truths are drawn vividly with pictures and memorable object lessons that leave no doubts about the nature of God the Father – and his many expressions of fatherhood through his love. God the Father is he who shows loving kindness to his children (John 16.27), which is expressed in:

– first and foremost – the value he places on each one of his children. We’re told the Father cares for all his creation – even for a creature as insignificant as a sparrow (Matt 10.29). But if the Father shows this much concern for something considered of so little value, then how much more are we, his children, made in his image, worth to him? Jesus assures us that we are worth more than many sparrows to the Father . (Matt 10.31)

– Fathers provide for their families and, because of his great love, the father provides for both those in his family, and those who are not in his family – by giving both what’s needed to survive – the sun and the rain (Matt 5.45) – both are required for life.

– Though the Father created all life through the Son, there are some who are more than just his creation. They are part of his family through adoption. To those he adopts he gives his name – the right to be called “children of God.” And how does one become adopted into the family of God? By believing on the Son of God (John 1.12) – receiving him as Lord and Savior (Acts 2.36), at which time you’re born again into the family of God by the power of the Spirit. (John 3.3, 3.5; 2 Cor 5.17)

– Though the father cares for all his creation, he shows a special care and concern for those who, through faith, become part of his family. For these, he makes sure that everything that happens in their life is working toward some good purpose (Rom 8.28). Further we know that nothing can keep these believers from the Father’s love. There is no created thing that can separate us from the Love of the Father as we abide in Christ (Rom 8.38, John 15.9-10). [4]

– No Father wants to see his children stray from what’s good for them. So as any good father will do, God the Father disciplines his children when they go astray. (Heb 12.6). Even if we run away from him, he longingly waits for our return – and rejoices when we do return – regardless of how disobedient we have been in our rebellion. Indeed even in the midst of our rebellion, God longs for us to return to him. With great patience, all day long the Father holds out his hands to us, beckoning us to return to him (Rom 10.21) And when those who have turned away do return, like the father of the prodigal (pictured above) the Father rushes to his son or daughter ready to welcome him or her back. Indeed the father is so full of joy at the return of a son who has turned away, upon seeing them from afar, the father runs to him and lavishly shows his joy with great celebration and rejoicing. (Much to the chagrin of those who have wandered away from him without physically leaving his house or overtly showing their displeasure. (Luke 15.11-23))

– On the day when God makes everything new – suitable for life in eternity, he tell us:

“1 Then I saw a new heaven and a new earth, for the first heaven and the first earth had passed away, and there was no longer any sea.
2 I saw the Holy City, the new Jerusalem, coming down out of heaven from God, prepared as a bride beautifully dressed for her husband.
3 And I heard a loud voice from the throne saying, “Now the dwelling of God is with men, and he will live with them. They will be his people, and God himself will be with them and be their God.
Rev 21.1-3

God promises to live with his people. And where will God’s children live? In a home with the Father of course. For what Father does not want his children near to him? Jesus tells us:

In my Father’s house are many rooms; if it were not so, I would have told you. I am going there to prepare a place for you.
John 14.2

In the eternal kingdom, the Father’s children are not far distant in some hotel or boarding establishment far from the heavenly palace.  The Father’s children live with him in the Father’s own house; and he has given each one their own room or “abiding place”[5] within his house, a place especially prepared for each one. (John 14.2)

All these are the characteristics and actions of a loving father. So it is most appropriate that when Jesus teaches his disciples to pray, he instructions them to start the prayer with:

So if you’ve been misled into thinking that God is some sort of cosmic tyrant, a mean dictator and killjoy, you’ve fallen for the lies of the evil one. You’ve been deceived by those who in their arrogance have rejected the love of the Father, so that like Satan, they can proclaim themselves god over their own lives. And they want you to do the same. That of course is a grave mistake.

Perhaps the clearest way to show how grand a lie is the slander of God being some sort of tyrant, dictator or otherwise mean-spirited killjoy is to compare that accusation against what the Father has done for all mankind – aside from creating this marvelous earth and universe we live in. John has recorded it in his gospel and it is perhaps the most well known and most loved verse in the entire Bible:

“For God so loved the world that he gave his one and only Son, that whoever believes in him shall not perish but have eternal life.
John 3.16

As one theologian put it:

God has done all he can to draw all people to himself. But as God wants us to freely love him, he has left one key item to us: The ability to choose whether to love him or not. God has not forced us to love him, he has left our free will intact. With it, we choose whether to spend eternity with God in eternal life and light or with the condemned in eternal death and darkness. (John 3.18-19)

It should now be clear to all that God in his love is reaching out to all, that all may live with him forever. But God will not force anyone. As he did with Adam and Eve, he leaves us the freedom to love and obey; or reject his word, reject his will and reject him.  Just as it was the choice of Adam and Eve to disobey which caused them to be expelled from the garden, our failure to choose to believe in Christ, to choose him as Lord and Messiah will be what causes us to be expelled from the kingdom of eternal life and light.

The choice is yours. God is reaching out to you. Choose wisely.

1. As clarified in the previous article, the Bible reveals there is one God eternally existing as three persons. This is known as the Trinity. The “person” referred to here is the first person of the Trinity
Back

2. For more on the Nicene Creed and The Definition of Chalcedon, see the second article in this series, “Knowledge of the Holy One Part 2: Jesus – The Holy One Denied”
Back

4. This of course means nothing that can separate us from the Love of God in Christ, because the only thing that exists besides all creation is God himself. And God has made clear he will never leave us nor forsake us. (Dt 31.6; Heb 13.5)
Back

5. The Greek μονη (monē) indicates a place where one makes ones dwelling or abode
Back

The Father runs to the returning prodigal  (Vienna Fresco)( by Josef Kastner the older © Jozef Sedmak  | Dreamstime.com (Used by permission)