In the recent Ken Ham vs Bill Nye debate on origins (which one tweeter aptly named the Ham on Nye debate) based on some comments I’ve heard,  it seems to me that a number of people missed one of the main points Ham was making. And since one the reasons for this blog is to defend the  Biblical account of origins let me revisit that point here.

Ham pointed out that the Bible makes specific claims about origins – the origins of the solar system, of people, of all creatures. In contrast the theory that allows Richard Dawkins to be an “intellectually fulfilled atheist” – Darwinian evolution – also makes claims – quite different claims. So the question is which explanation better fits the evidence? On the one hand, in a doctrine known as “common descent” Darwinian evolution claims that all creatures are descendents of a single ancestor. That means that all creatures are related and are part of what’s known as the evolutionary tree of life.

On the other hand the Bible claims that creatures were created by God, “according to their kind” (Gen 1.21, 24, 25, etc.). Kinds are not species – they’re more general than that. Think dog kind, cat kind, bear kind, dolphin kind, etc. Within each kind God allowed for a lot of differences – what evolutionists call variation. So within “dog kind” a lot of different dogs characteristics can become differentiated from the original dog kind to create different dog species. Thus when all the types of creatures that God created are collected, what you wind up with is not a single tree, but many trees. And so the Biblical model is aptly named the “orchard” model, because instead of a single tree of life, you have an orchard full of different creature “kinds”. Where as Darwinian evolution claims you’re related to all living things – however distantly – including roaches, sponges, spiders, snakes and any other creature you can think of, the biblical model claims those creatures are in an entirely different tree – they are an entirely different kind, created differently by the creator so there is no relation to use Darwinian terms.

Since evolutionists believe all creatures are descended from a common ancestor, they must place all creatures on the same tree of life. That can be problematic – since all creatures don’t neatly fit. Case in point: the red panda. As this Creation article points out, the red panda has been a point of contention for evolutionists for over a century. I think I hear an atheist out there saying “that proves nothing – that scientists disagree over where to place the red panda – groups like the convention on biological diversity will figure it out.” I would suggest such objections are trying to trivialize the problem without solving it. And if such groups suggest an answer, of equal interest would be how they solve the problem – evolutionists are well  known to change the rules and definitions when the evidence doesn’t fit their theories.

At any rate the point of this site is to present evidence. And a strong piece of evidence is this: the mixed traits in creatures like the red panda that make the job of the taxonomist – those who classify creatures – difficult – are better explained by a creator creating a number of different “kinds”; than trying to squeeze creatures into the evolutionary tree on a branch where they simply don’t belong in order to rescue a theory that doesn’t fit the evidence. In God’s scheme of things, mankind is the pinnacle of creation (Psalm 8.5); in the evolutionary scheme, you’re just a fellow animal among the lions and tigers and bears, (oh my!). Which brings up another piece of evidence – isn’t there a certain aesthetic beauty to God’s scheme? Mankind created in God’s image compared to the evolutionary scheme where man is just another animal somehow arising from the slime? And while we’re at it, where does the perception and appreciation of aesthetics come from? That’s a topic for another post. 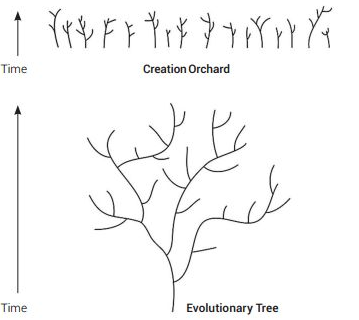 Graphical depiction of an evolutionary tree vs a creation orchard, representing the observed pattern of life. In the hypothetical evolutionary tree, all life ultimately derives from a universal common ancestor. In the creation orchard, the original created kinds have diversified based on horizontal genetic variation over time, but still retain their categorical created kind status.

For details, “Incomplete lineage sorting and other ‘rogue’ data fell the tree of life”
http://creation.com/rogue-data-fell-tree-of-life