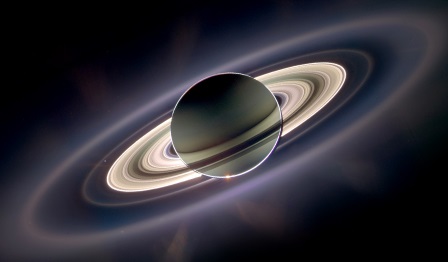 That is the scenario we have with the Rings of Saturn. Scientists have calculated the “life span” of the rings, and it is not at all in line with what they calculate the age of  either the solar system or Saturn. So if the rings are “alive” now, they must be relatively young; for if they were as old scientists say the rest of the solar system is – some 4.6 billion years – they would have long ago vanished.

The current theory of how our solar system was formed is known as the nebular hypothesis. According to the theory, after the big bang, a giant molecular cloud collapsed in on itself due to gravity. During the collapse the matter began to spin. Most of the mass wound up being drawn to the center and formed our sun. The rest escaped, and the spinning flattened the escaped mass into a protoplanetary disk out of which the planets were formed. This all happened some 4.6 billion years ago.

In this scenario all the planets formed at about the same time – some 4.6 billion years ago. That’s all fine and good – except for the numerous pieces of evidence that we have that the universe is neither 13.7 billion (age of the universe) nor 4.6 billion (age of the earth) years old. One of those pieces of evidence is the rings of Saturn. According to scientists, after 4.6 billion years Saturn’s rings should be polluted, black – covered with star dust – the stuff Carl Sagan says we’re made of. But that is not the case. The rings are bright in shiny – they look pristine. Jeff Cuzzi, a planetary scientist at the NASA Ames Research Center puts it this way:

First, they are bright and shiny like something new. It’s no joke, he assures. The wide-spanning rings sweep up space dust (bits of debris from comets and asteroids) as Saturn orbits the Sun. Rings much older than a few hundred million years would be darkened by accumulated dust. “The fact that they’re bright suggests they’re young,”1

But there’s a bigger problem. Saturn’s rings are very dynamic, composed of  ice particles of all sizes – from particles smaller than sand to boulders bigger than houses –  flying around the planet at speeds that range from 20,000 to 40,000 miles per hour.   These particles are influencing  the moons of Saturn gravitationally such that  the moons are increasing in speed and the ring particles are slowing down. Eventually the moons of Saturn will be ejected from orbit and the beautiful ring will fall to the planet. That will happen in the next few hundred million years. Or as Cuzzi puts it:

“During the next few hundred million years,” explains Cuzzi, “the outer half of the rings will fall toward the planet, and the little moons — called shepherd satellites — will be flung away.”2

The fact that this hasn’t happened yet clearly implies that the rings are not yet that old (otherwise the rings would be gone). So here we have two pieces of strong evidence that Saturn’s rings are young – less than a few hundred million years. But since the current theory of planetary and solar system generation requires billions of year, instead of accepting the obvious, the many who do not want to accept a young universe (to save their theories of origins that don’t involve God)  look for excuses as to why the obvious is not true. While scientists don’t know how the rings were formed, some are speculating they somehow formed after the planet came into existence – since it is clear they can not be as old as the planet is claimed to be. The problem with supposing the rings formed later is that – for as a scientist – guesses must be backed by evidence. The current theory for ring formation is a small moon was destroyed as it spiraled into Saturn.3 The problem with that theory: if the rings were made from a destroyed moon, you’d expect them to be primarily made of rock. As it is, the rings are primarily ice (90%). So theories of rings from moons are unconvincing. It makes a lot more sense to say the rings are young, but scientists don’t want to go there – they need billions of year to maintain current theories of planetary and solar system formation – and never mind the clear evidence to the contrary.

1 Jeff Cuzi, Nasa Science and News  “The Real Lord of the Rings” http://science1.nasa.gov/science-news/science-at-nasa/2002/12feb_rings/

2 Cuzzi, The Real Lord of the Rings

Earth’s magnetic field: Testament to more than a young earth | The Creation Club | A Place for Biblical Creationists to Share and Learn

[…] beautiful women.  Both Saturn and diamonds are testimonies to a young earth (which I wrote about here and here). The earth’s magnetic field is also a testament to a young earth – but […]