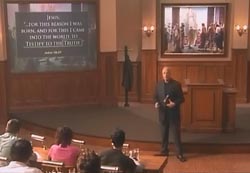 As you might imagine of one hosting a website that deals with apologetic issues, I listened with interest to the debate last  Saturday on Moody’s Up For Debate entitled  “Do Apologetics Help or Hurt our Christian Witness?”  As always the host, Julie Roys welcomed well qualified guests for the  discussion: author and professor David Fitch and  author and professor Nancy Pearcey. Dr. Fitch offered the concern that  apologetics train us in a posture of defensiveness;   and that we don’t listen as  well, having  answers ready before we hear the question. His main objection is summarized in this tweet:

We have a posture of defensiveness which is not needed. Rather we need to embody the story God is telling through us. – #DavidFitch

Professor Pearcey had a number of good responses, in addition to her own testimony of how apologetics helped her come to the  faith, some of her reminders include:

– We need to be inclusive in our approaches
– We should use all the tools available to us
– It is possible to do apologetics wrong (implied: therefore learn to do it right!)
– Apologetics can descend into a game of “gotcha”
– And as she reminded us in this tweet:

#Apologetics assists in making ones understanding not simply emotional but intellectually. – #NancyPearcey

But the answer I was expecting, but didn’t hear (unless I missed while I moved from the car to the house) was a statement about  the truth. Focus on the Family recently put together a world view instructional series called The Truth Project led by Dr. Del Tackett. Dr. Tackett opens the series by asking the question why did Jesus come? Many correct, but off the point answers are  proffered, until Dr. Tackett finally gets to the point, and quotes Jesus in his reply to Pilate:

Jesus answered, “You are right in saying I am a king. In fact, for this reason I was born, and for this I came into the world, to testify to the truth.
John 18.37

Having made the point that the reason Jesus came was to testify to the truth he goes on to point out another key truth:  Jesus  came to testify – as in a court of law. Why? Because the truth is under attack.

That was no more apparent than during the reboot of the series “Cosmos” which aired  Sunday night.  The original widely popular  series was hosted by  Carl “billions and billions”  Sagan.  This reboot – showing a new age has arrived with its  introduction by president Obama and hosted by astrophysicist Neil deGrasse Tyson, an African American scientist, has not changed in one key respect – it is still as atheistic and Anti-God as the original series.

In addition to loudly and clearly proclaiming the godless theories of  the Big Bang and Darwinian Evolution they also included unmistakable  anti-Christian, anti-faith depictions in a segment on the Renaissance Italian visionary Giordano Bruno, who imagined the cosmos to be much as it actually is.  As clearly depicted as his vision, is the clearly pejorative depiction of an incorrect,  narrow minded church in a thinly veiled attempt to discredit and marginalize the church and  indoctrinate a whole new generation of kids into science with a mistaken impression that science today means science without God.

This is where  apologetics needs to come in.  As Jesus was, we as Christians need to be about the business of proclaiming the truth – the very  reason why Jesus came.  And we need to be able to do it with sound answers.  Otherwise we’ll wind up with more kids  thinking as author Lee Strobel did after learning of the Milley-Urey experiment. The experiment purported to demonstrate that organic compounds – key ingredients of life – would naturally occur in the early environment of the  earth. His thought upon learning of it:

“The moment I first learned of Miller’s success, my mind flashed to the logical implications: if the origin of life can be explained solely through natural processes, then God was out of a job!1

The problem with this iconic experiment, however is that it did not at all represent the early atmosphere of earth as scientist and author Jonathan Wells explains:

“Since 1977 this view has become a near-consensus among geo-chemists. As Jon Cohen wrote in Science in 1995, many  origin-of-life researches now dismiss the 1953 experiment because ‘the early atmosphere looked nothing like the Miller-Urey  simulation.’ ” 2

Fortunately for Lee, he has since learned the truth and is now proclaiming it – as we all should be.  But if we’re not out  proclaiming the truth and providing the true narrative,  we’ll continue to see more kids fall prey to the indoctrination of the godless worldviews of this age coming from the likes of shows such as  Cosmos and a cadre of scientists like  Maggie Aderin-Pocock who is, no doubt, aware of the errors with the experiment, but continue to promote it as definitive a foundational truth as she did in  “Do We Really Need the Moon?”3

So do we really need apologetics? A resounding yes! And what’s the most important reason? To strongly and competently defend and testify about the truth. Do not allow what you consider good to be spoken of as evil. (Rom 14:16 ) Is there any greater evil than the continued and repeated denials of the very truths upon which the gospel is founded?

3  Pocock, Maggier Aderin host of “Do We Really Need the Moon” TV Documentary, 2011

Photo above – Del Tackett during The Truth Project explaining why Jesus came – to testify to the truth.

Tomorrow, I will need to write a writing in regards to this area of interest, so you ended up saving me a lot of time with the great details.

Next week, I need to prepare a paper about
this subject, so you saved me a lot of time with the useful references.

[…] Do we really need apologetics? A resounding yes! And what’s the most important reason? To strongly and competently defend and testify about the truth. ‘Do not allow what you consider good to be spoken of as evil.’ (Rom 14:16 ) Is there any greater evil than the continued and repeated denials of the very truths upon which the gospel is founded? — Duane Caldwell (from, The Best Reason for Apologetics) […]

This design is wicked! You certainly know how to kesep a reader amused.
Between your wit and your videos, I was almost moved to start my own blog (well, almost…HaHa!)
Wonderful job. I really enjoyed what you had to say, and
more than that, how you presented it. Tooo cool!