Unfortunately many Christians – including some well known, well regarded apologists and leaders- have elected to undermine the biblical account of origins by taking one of the two compromise positions below.  In their desire to reconcile science and the Biblical  account of the beginnings of all created things (the universe, earth, life), they are attempting to do what cannot be done: have their cake and eat it too. To appease a scientific community that has misinterpreted the data they’ve turned to either Theistic Evolution of Progressive Creationism – both of which are in compatible with the biblical account.

Someone will ask, á la Hillary, what difference does it make? What does it matter what we believe about origins? Perhaps a few questions will clarify it for you:

– If God can’t be trusted about the origins of the soul can he be trusted for the moral commandments for the soul?

– If God can’t be trusted about the origins of sin, can he be trusted for the solution of sin?

You see all the beauty that God has promised for the life to come is tied up with the beauty of how God started this present world and this present life. If you deny God’s account of originating events, and in so doing reject His assessment that when he finished, everything was “very good” (Gen 1.31); (which included the facts that there was no death, no sin, no separation from God); then if you don’t believe him for the the beginning, why believe him for the ending?  Many, including young Christians of college age, have noticed the disparity between what science teaches and what the scripture teaches and have left the faith because of it1. They have concluded if this story from scientists is right – as many of their teachers and pastors are telling them – then scripture must be wrong, and none of it can be trusted. They are (ironically and most unfortunately for those in Christian schools), simply following what they’ve been taught. (A charge usually leveled derisively at church goers.)

Speaking as a former pastor, I address this question to pastors and Christian leaders who have abandoned the Biblical creation account to embrace bad interpretations of science: How can you expect your congregations, and the people who eagerly read your books, to stand firm in the faith if you won’t? Scripture records “The disciples were called Christians first at Antioch.” (Acts 11.26) The word “Christian” – is  translated in many a sermon as “little Christ”,and is supposed to represent someone who believes and acts as Jesus did. Jesus believed in the Biblical account of creation (Matt 19.4-5), in the global flood of Noah’s day (Matt 24.37) in  Jonah and the fish (Matt 12.40). Since evolution was not popularized until after Darwin’s 1859 The Origin of Species – Jesus clearly did not have that in mind. So why do you allow evolutionary ideas to be injected into scriptures that clearly mitigate against it? Or are you unaware that one reason Darwin wrote Origin was to obviate the need for God?2

There are two flavors of compromise when it comes to those who refuse to remain steadfast in the faith – and history – “once for all entrusted to the saints.” (Jude 3). There is the straight compromise of Theistic Evolution, promoted by Francis Collins and his Biologos organization. Then there is the syncretistic compromise approach of Progressive Creationism, promoted by Hugh Ross and his Reasons to Believe organization.

Of the two, Progressive Creationism is more dangerous because it is more insidious, claiming to support the Biblical Creation account while all the while quietly injecting evolutionary ideas, concepts and time lines into the Biblical account.  At least theistic evolution tells you up front what it is -a flavor of evolution – that  its adherents claim was God’s method of creating. They’re wrong of course, but at least they’re up front about what they believe.

Contrast that to Progressive Creationism which claims to be creationist to the core, but if you look at what they believe, (made plain in the table below), you’ll see there is not a single tenet of the Christian account of origins that they have not contaminated  with incorrect evolutionary doctrine,  timelines, or both. This adding of  evolutionary material is a clear attempt to harmonize biblical and evolutionary accounts; and is the very essence of syncretism. And they do so as noted above with teachings that are diametrically opposed to the faith. Speaking of syncretism, it is very interesting that in an article meant to support a literal Adam and Eve3, out of the many, many paintings they could have chosen to depict Adam and Eve (an example is above), which one do they select? One that includes the mythical  Lilith – an extra-biblical character – variously depicted as Adam’s rejected  first wife, or a  half serpent, half woman creature;  and in some circles regarded as the mother of the demons of seduction (succubi4). Perhaps the selection of that picture was an  unconsciously performed act of syncretism; but it certainly fits the spirit of what they do there at Reasons.org – adding untruths to the biblical account.

Before going to the chart, let’s clarify a few things in the debate which some people may find surprising:

– Natural Selection:
First off, note natural selection is NOT synonymous with evolution. Natural Selection is a process whereby various traits increase or decrease in a population  due to various pressures (typically external) on the organism. You may be surprised to learn that it was first proposed by a Christian as an explanation of how the sick,  weaker, or defective creatures were removed from a population.5
While it is not mentioned in the Bible it is included in the Creation column because it accords with the biblical doctrine of the fall, was proposed by a Christian, and most (if not all)  Creationists agree with it.

-Theistic Evolution
Believers in theistic evolution (TE) swallow the entire evolutionary story, hook, line and sinker. The only way TE  differs from pure evolutionary doctrine is in their  attempt to shoehorn in some works of God, along with the required, but poorly  accommodated for the human soul (sometimes called the spirit in this context). The soul is a huge problem for TE believers. Since they don’t believe in an actual Adam and Eve, they have no definitive place where they can point to where God imparts a soul to man,  since they don’t know precisely where apes end and man began. In spite of these gross errors please note that as long as they are still confessing Christ as Lord, they are still be considered Christians (as are those who believe in Progressive Evolution). Though confused, mistaken, and mislead this is not a salvation issue
(as Ken Ham keeps pointing out).

-Progressive Creation
Of the two (TE and Progressive Creation), this is the more dangerous because of its deceptive nature. Adherents claim to be creationists – but when you dig into the details, all their explanations include evolutionary concepts and time frames. For example:

– They believe that God created the Universe – but He did so according to the Big Bang account and sequence of events6, which varies greatly from the Genesis 1 accounting of events7.

– To create the world we have today, progressive creationists believe God did a bit of creating, then paused for a few million years, then returned to the work of creating to create some more new creatures after some species have gone extinct in the interim. This is nowhere represented in scripture, and does not fit in the biblical account.

– They claim that evolution is false, yet they use evolutionary time lines, evolutionary interpretations of evidence, and evolution as applied to the universe (the Big Bang). Clearly their primary concern is inclusion of evolutionary ideas; not fidelity to the biblical account. 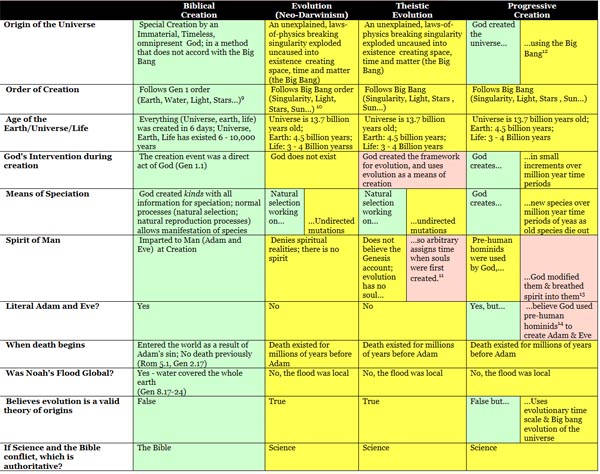 As you can see from the chart above, Theistic Evolution is pure evolution with 2 minor bones thrown to accommodate their Christian faith. Progressive evolution is also mostly evolution, with the much more dangerous aspect of syncretistic doctrines added to it. Their approach is  “we believe in special creation, but…” and then add evolutionary doctrine.  Neither of these positions is what the bible describes.

As noted above, both of these doctrines undermine biblical Christian faith. Could this be why so many people are falling away from the faith: Christian leaders who refuse to stand firm in their faith? This is a call, particularly to Christian leaders,  to return to, and stand firm in the faith “once and all entrusted to the saints.” (Jude 3). Perhaps the warning God gave to Ahaz, king of Judah by the prophet Isaiah is appropriate for the church in this age:

“If you do not stand firm in your faith, you will not stand at all.”
Isaiah 7.9

Could these two compromises be part of the reason for the coming apostasy?
(Matt 24.10)

For another helpful summary of the differences between Progressive Creation and orthodox Christianity, see the article by Jonathan Sarfati titled Shame on Chrisma!
– DC 5/19/2017

1 For details on this, see Ken Ham “The Relevance of Creation”
https://www.youtube.com/watch?v=CFn46VSOXj4  at about 20 minutes
back

3 see “Were they real?  The Scientific Case for Adam and Eve, Fazale
Rana, RTB 10/1/2010
http://www.reasons.org/articles/were-they-real-the-scientific-case-for-adam-and-eve
back

4 Lilith as mother of the demons of seduction – (Succubi, singular
succubus), see http://en.wikipedia.org/wiki/Succubus
back

5 Darwin stole the idea of Natural Selection from the Edward Blythe, a
Christian who believed in what is now called special creation.
http://creation.com/charles-darwins-illegitimate-brainchild
back

7 For more on the Biblical order of creation see:
John G. Hartnett, “The Big Bang is not a Reason to Believe”, Creation Ministries International,  5/20/2014  http://creation.com/big-bang-not-a-reason
or
Jason Lisle, “Does the Big Bang Fit with the Bible?”,  Answers In Genesis, 4/5/2010
https://answersingenesis.org/big-bang/does-the-big-bang-fit-with-the-bible/
back

On Neanderthals Interbreeding with modern humans:

“…we have a little bit of Neanderthal ancestry in modern human genomes”
Ed Green, geneticist
University of California
“What we have shown clearly is that we [modern humans] could interbreed with them [Neanderthals], and we could have fertile children. And at least some of these children became incorporated in the human community and reproduced and contributed to present day humans.”
Svante Paabo, geneticist
Max Planck Institute, Leipzig

9 See note 7 for the Biblical order of  events

10 See note 6 for the Big Bang order of events

11 The is a necessary conclusion based on the fact they reject that Adam and Eve actually existed; and thus could not be the recipients of the original breath of life from God.
See: http://infidels.org/library/modern/bart_klink/evolution.html#soul

12 Hugh Ross and his Reasons to Believe organization unabashedly teaches the Bible supports the Big Bang, with no explanation of why the events are so radically different.
See here: http://www.reasons.org/articles/big-bang—the-bible-taught-it-first

13 “In particular, in progressive creation, God came down and took two hominids and literally breathed a soul into them, to create Adam and Eve.”
“Progressive Creation” RationalWiki, 11/29/2019 http://rationalwiki.org/wiki/Progressive_creation