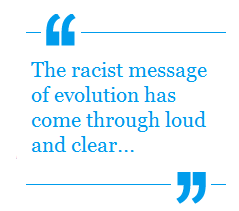 Let me summarize my views on what modern evolutionary biology tells us loud and clear — and these are basically  Darwin’s views. There are no gods, no purposes, and no goal-directed forces of any kind. There is no life after death. When I die, I am absolutely certain that I am going to be dead. That’s the end of me. There is no ultimate foundation for ethics, no ultimate meaning in life, and no free will  for humans, either.3

It follows if there is no ultimate foundation for ethics, no purpose and no free will – we and our actions are just the result of the undirected forces acting on the atoms that compose our body – there can be no evil. Prominent atheist Richard Dawkins makes that point  abundantly clear:

“The universe we observe has precisely the properties we should expect if there is, at bottom, no design, no purpose, no evil and no good, nothing but blind, pitiless indifference.”4

If you think this is viewed as a weakness in the evolutionary worldview or paradigm, you’d be mistaken. When Dawkins was asked about that during a debate with computer scientist and evolutionist Jaron Lanier, note his response:

Jaron Lanier: ‘There’s a large group of people who simply are uncomfortable with accepting evolution because it leads to what they perceive as a moral vacuum, in which their best impulses have no basis in nature.”

Richard Dawkins: ‘All I can say is, That’s just tough. We have to face up to the truth.’5

So instead of taking pause to reconsider if he really wants to take the world down the rabbit hole of a universe with no recognition of good and evil, Dawkins doubles-down and basically says face it and get used to it, there is no such thing as “evil”. Is it any surprise then, that those who grow up under that philosophy which sees no value to life start acting like it’s true?

Evolutionary lie number 2: The greatest potential of the human race will be achieved through the purifying process of “survival of the fittest.”

Declaring there is no evil merely clears the way for unrestrained malice, but the impetus behind acts of murder perpetrated by those brain washed by evolution is the doctrine of “survival of the fittest.” That familiar doctrine, appealed to by a number of mass murderers, was espoused and propagated by Darwin himself:

“One general law, leading to the advancement of all organic beings, namely, multiply, vary, let the strongest live and the weakest die.”
― Charles Darwin, The Origin of Species

Darwin’s theory of “survival of the fittest” led to false beliefs regarding different human races: some were supposedly superior to others. That of course had its clearest, deadliest expression in Hitler’s belief in a superior (though fictitious) Aryan race. Hitler’s goal: to have the Germans rise to be a race of “supermen.”6 And where did Hitler get such an idea? Likely from the German scientist Ernst Haeckel. This is the same Haeckel, who in his desire to produce evidence for evolution (since nothing of substance existed), created the fraudulent embryo drawings that are still referenced today – even though they’re known to be outright frauds.7 He also wrote Welträtsel (‘Riddle of the Universe’), a best seller which introduced Darwin’s ideas on survival of the fittest to a wide German audience.8

Hitler’s racism has of course inspired many copycats (Skin heads, neo-nazis, etc.) and other followers who espouse a philosophy of white supremacy and racism based on the logical conclusion to Darwin’s concept of survival the fittest applied to humans who are seen merely as another animal. The seeds of that philosophy have taken root, and the fruit is clearly seen in the statements made by the various perpetrators of the ruthless murders mentioned above:

From the alleged South Carolina shooter:

From the convicted killer in the 2014  Corpus Christi Catholic College incident:

“I wasn’t in shock, I was happy. I had a sense of pride. I still do. I know it’s uncivilised but I know it’s incredibly instinctual and human. Past generations of life, killing is a route of survival. It’s kill or be killed. I did not have a choice. It was kill her or suicide.” 10

From the rantings of Columbine killer Eric Harris:

“NATURAL SELECTION. F—er should be shot.”11

Dr. Robert Hare, one of the psychologists consulted by the FBI about Columbine, states regarding Harris:

“These are the rantings of someone with a messianic-grade superiority complex.”12
(emphasis his)

The racist message of evolution has come through loud and clear to these killers: whites are superior, anyone not white is inferior; the darker, the more inferior. The only exception – (applicable to Nazis and other Aryan-oriented groups) – is Jews are at the bottom of the list, not those of African descent. Though in the eyes of such killers, it hardly makes a difference – such racists desire both groups be included in what Hitler called “the final solution” – mass execution of undesirable races.

The racism of evolution is not even very subtle. Take any documentary on evolution and what will you see? A progression from black haired, black skinned apes, to dark skinned humans, to light skinned humans with the last, most advanced humans, always presented as Caucasians. Think I’m exaggerating? Judge for yourself. Following are some typical sequences:

From the Documentary: From Ape to Man13

These progressions are typical – though there are exceptions.  On occasion you’ll get a documentary that will depict homo sapien (modern humans) as Africans – but they still leave plenty of room for racial bias. For instance the BBC documentary “Planet of the Ape Man: Homo Erectus Versus Homo Sapien” no doubt thinks it’s being progressive showing homo sapiens as dark skinned Africans. But they make sure to note those Africans depicted are 100,000 year old specimens of homo sapiens – plenty of time to evolve to a higher, lighter skinned status. And worse they follow the racial bias that typically comes out of Hollywood: kill the black man first.

In his report on the senseless killings in South Carolina news commentator Bill O’Reilly laments that that no one can stop all such killings. However like the theory of evolution, that is only a secular perspective. For those who can see beyond the material world know there is a king who has promised:

He will wipe every tear from their eyes. There will be no more death or mourning or crying or pain, for the old order of things has passed away.
(Rev 21:4)

This king will reign in a pure kingdom that shall never be tarnished by such wicked thoughts, much less wicked deeds such as murder, for the king has promised:

Nothing impure will ever enter it, nor will anyone who does what is shameful or deceitful, but only those whose names are written in the Lamb’s book of life.
(Rev 21.27)

What then will happen to those wicked ones who “refused to repent of what they had done.” (Rev 16.11) There is a place for them, but it is not with the king. No, to them the king shall say:

“Depart from me, you who are cursed, into the eternal fire prepared for the devil and his angels.” (Matt 25.41)

To be explicit (in case it’s not clear from the references) that king is Jesus. I often hear objections to the doctrine of eternal condemnation -hell- that it’s threatening, not persuasive, and raises questions about the character of God. But consider- do you want to live in a kingdom where you’re considered sub-human and those at the top are trying to kill you – to rid the world of you? (If you’re at the top15, consider it from the point of view from someone who isn’t.) No, no one does. That’s why God will not tolerate racism in his kingdom. And as the King promised to fight against the false doctrines of the Nicolaitans(Rev 2.15-16) it’s a sure bet that he will likewise fight against the false teaching of evolution which not only leads to racism, but is a direct affront to God. For those who refuse to repent of their hatred and racism, they will find themselves outside of the kingdom, in a place “where ‘their worm does not die, and the fire is not quenched‘”  (Mark 9.48), where there will be “weeping and gnashing of teeth.” (Matt 8.12) Though I’m told such warnings are not persuasive, consider yourself  warned.

5 ‘Evolution: The dissent of Darwin,’ Psychology Today, January/February 1997, p. 62.
referenced from Evolution: No Morality
https://answersingenesis.org/theory-of-evolution/quotes/evolution-no-morality/
back

6. Speaking of Nazi beliefs, Dr. Linda Dubrow-Marshall, a psychologist from the University of Glamorgan notes:
“It’s kind of like a comic book – they’re going to be superheros, supermen.”
The Nazi Gospels, Documentary (History), 2012
back

11. Dave Cullen, The Depressive and the Psychopath Slate.com 4/20/2004
http://www.slate.com/articles/news_and_politics/assessment/2004/04/the_depressive_and_the_psychopath.html
back

12 Cullen, The Depressive…
back

15 Hitler’s view of the “pure” race that is on top is listed here, compiled in a chart that Kent Hovind calls  “Hitler’s Hit List” – from James Rhodes, The Hitler Movement; A Millenarian Revolution, Stanford, CA: Hoover Institution Press, 1980 p. 107; this chart Referenced from Kent Hovind, The Creation Series, Video series
back

@DanThaWildman (Twitter name) Provides further evidence that Darwin taught there were higher and lower races of humans – and the higher races will “exterminate” the lower “savage” races.