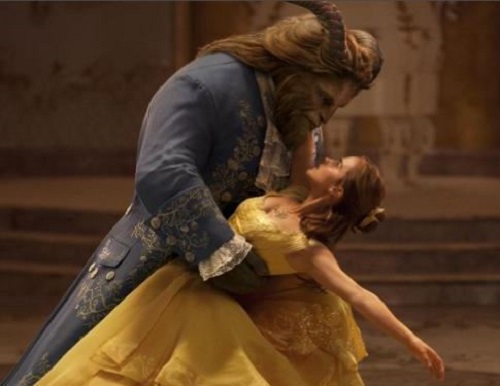 Emma Watson and Dan Stevens in Beauty and the Beast (2017)

With Disney’s increasing support of the gay agenda (“Gay Days” at it’s theme parks, increasing exposure of gay scenes in its films aimed at kids) and now with a “gay moment” overshadowing Disney’s new live action version of its classic “Beauty and the Beauty” it has some wondering out loud, “Is it Time to Kiss Disney Goodbye.” [1] Sadly, I have to say “yes” as I note in this tweet. And to further note my opposition to Disney’s move toward encouraging the gay agenda, I encouraged others to boycott Disney’s new Beauty and the Beast film: 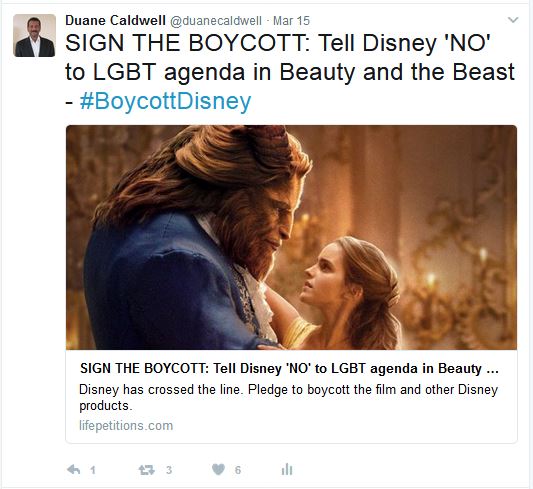 Apparently a journalism student in the UK saw my tweets and contacted me about questioning me further on the matter:

I expressed concern that my views might be misrepresented since philosophically, she appears to be at the opposite end of the spectrum, but she assured me that as a journalism student it’s her job to be objective and would represent me fairly. Still in today’s climate of bias, partisanship and fake news I wanted to be able to show my responses in their entirety without any edits, or spin applied. So I informed her that I would only do a written interview, and would be publishing it in it’s entirety on my website. So following are the questions she sent, and my entire, unedited responses.  Once her article is published, I will update this article to include a link to it at the end. Her questions are in italics.

Update 4/20/2017
Alys Miller’s article is here: Boycott Beauty and the Beast?
The interview she based my answers on follows.

Alys: My main questions for you are:

1) Do you agree with the call for a boycott on the film?
I’ve tweeted out links to the Life Petition site where they host a “sign the boycott” of Disney’s latest Beauty and the Beast film, so obviously yes.
2) What are your reasons for agreeing? (because you think this may be too much for children, because of your religion, etc)
Those are all factors, yes. In fact, I tweeted out a link to an article[2] by a gay man who says it’s too much for children. And yes, the gay scene is also against my religion (I’m a Christian – a follower of Jesus) but really that’s not my main reason for supporting the boycott and opposing the film. My main objection is a term some will likely find offensive, but the concept behind the term fits. As a flight instructor, we’re taught that flight students should not be allowed to “normalize deviance.” In other words, they should not get used to wrong or bad practices.  So if you’re practicing touch and goes (touching down on the runway, then immediately taking off again), you don’t allow the student to think it’s normal and okay to land 15 or 20 feet to either side of the runway center line. As a flight instructor, your job is to make sure they don’t get used to landing beside the centerline, and you don’t allow them think it’s an okay practice.  You insist they adhere to goal of landing on the center line and as a student to continue to strive to do so until they can.Likewise as both a Christian and a parent, I don’t want the LGBT+ agenda (which as far as Christianity is concerned, is a deviation from the norm that God has created) – to be normalized.  In an airplane, allowing such bad practices could have you landing off the runway – with potentially fatal consequences. In this matter, it’s a detrimental to both the individual and society, with potentially fatal spiritual consequences.  Because once you start down that road, what’s to keep you from normalizing more and more things that are further and further from what God intended?  Just as we saw when the US Supreme court “legalized” gay marriage in the US, the next thing you saw were some in the LGBT+ community calling for the legalization of polygamy. And it just goes on from there. Once you normalize one deviation, people think the next deviation is not so bad. So when that next deviation comes up – which is even further away from the norm – it doesn’t seem so far from the norm because you’ve already normalized the previous  deviation. Even if you don’t accept the argument of “God’s intent” it should be painfully obvious biologically what the biological intent is. Biologically, homosexuals, by themselves, cannot reproduce. Whether you consider that part of God’s design (as I do) or not you can’t – as a rational person – deny that fact.  By the way, that biological limitation is in part, why they’re going after our children. If they don’t recruit, their numbers will fall. So after they normalize the deviation, they want to persuade impressionable kids to join the lifestyle. Jesus had a word for people who lead children astray: Woe! (Matt 18.7)

3) Do you think Disney as a whole should keep all LGBT+ references out of its films seeing as its main demographic is young children?
For films aimed at children, absolutely. As a parent, I don’t want to take kids to a movie I think is “G” rated – only to find out Disney now considers what used to be rated PG13 or R is now “G” – suitable for general audiences. Disney made a name for itself on wholesome family entertainment. If they want to abandon that practice, they should be prepared for those families looking for the wholesome entertainment they used to provide, to abandon them and look for family friendly fare elsewhere.

4) Do you think all films/companies as a whole should keep LGBT+ references out of public media?
Not necessarily. In the kingdom it will be that way, but this is a fallen world. Still, I don’t want it shoved down my throat at every turn. If a movie company wants to make an explicitly gay themed movie like “Kissing Jessica Stein“, they’re free to do so. People who go to see it know what they’re getting. And people who don’t want to see it can avoid it.  But people should not be subject to going to what they think is a family friendly movie – with traditional family values – and having the LGBT+ themes and scenes paraded continually or shoved down their throats.

Such concern for the feelings of LGBT+ community, are by the way, a bit hypocritical. Many in the LGBT+ community have no problems calling Christians and other opposed to the gay agenda “homophobic, ”  without regard to their feelings. The term isn’t even used correctly – a “phobia” is a fear of something. Those of us opposed to the gay gender do not “fear” gays; we  oppose the lifestyle and behavior for many reasons, not just religious, but also for reasons of  health, family, and community well being.

So there you have it. I will post a link to Alys’ article here once it is available.

1. Ken Ham and Avery Foley, “Is It Time to Kiss Disney Goodbye?“, ,Answers in Genesis, 3 March 2017, https://answersingenesis.org/family/homosexuality/time-to-kiss-disney-goodbye/
Back

2. Nancy Floury, “Gay Man Speaks Out: Gay Scene in Beauty and the Beast Too Mature for Kids” The Stream, 14 March 2017,
https://stream.org/gay-man-speaks-out-about-beauty-and-the-beast-too-mature-for-kids/
Back

Here’s an example of “normalization of deviation”:
A couple living together used to be considered “sin”, and not something respectable people would do. Now it doesn’t even raise eyebrows and is not “even worthy of a yawn.”

“We’ve come a long way in the last 50 years, and where we find ourselves today is far from good.”
Dr. Michael Brown
A Glaring Example of Our Fallen Morals in the Recent Georgia Election”
https://stream.org/glaring-example-fallen-morals-recent-georgia-election/