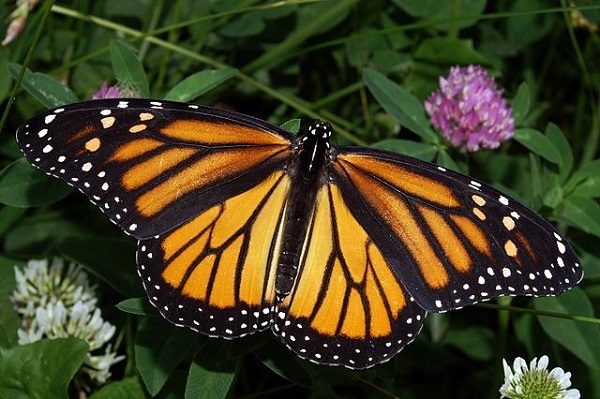 If you’re here for news on the Monarch Adventure Summit, click here. To see how monarchs are a glorious testament to our creator God, keep reading.

For those paying attention, it is clear that God has left pointers to himself in his creation as scripture says:

For since the creation of the world God’s invisible qualities–his eternal power and divine nature–have been clearly seen, being understood from what has been made, so that men are without excuse.
Rom 1.20

When giving tours of the Milwaukee Public Museum, I point out how that’s true regarding the duck-billed platypus. Today we’re going to look at how the miraculous features of the monarch butterfly point back to its divine creator.

Mysteries of the Monarch

There are some 20,000 species of butterflies. Richard Boender, founder of Butterfly World in Fort Lauderdale, Florida, says this about them:

“Every one of these 20,000 species have different color patterns, and everyone of them has different shaped wings. The diversity is just so magnificent. If I was the greatest artist in the world, there is no way I could come up with all of these patterns. It would be absolutely impossible.”[1]

The diversity alone is astounding, a reminder of how much our God appreciates the subtle differences that make us distinct. And many of the miraculous mysteries concerning the monarch are true with regards to the 20,000 species of butterflies in general, but for the purposes of this article, we’re going to focus in on one species: the monarch butterfly. 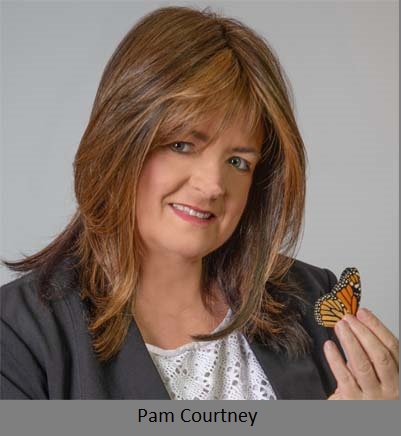 There are a number of things that point to God when considering the monarch, and perhaps an easy way to organize them is to go through the life cycle as laid out by Pam Courtney, (left) a butterfly aficionado who raises and releases monarchs. Pam has written a workbook and Bible Analogy Study Guide titled “Monarch Adventure.” She lays out the lifecycle as follows:

Each has a unique feature or features that either directly point to the creator, or are reminiscent of similar acts of the Creator that remind us of him. We’ll look briefly at some of these features.

Pam points out the monarch butterfly lays eggs that are transparent (I’ll come back to this) and in the shape of a dome, like the majestic church cathedrals found throughout the world. And they have a unique grooved texture to them. Already we again see the beauty inherent in the form. But further, the eggs are laid on only one type of plant: milkweeds. And they are secured by an adhesive secreted by the female butterfly when she lays the egg. Then she covers them with a wax that keeps them moist and viable.

Here we see another argument for God at work, one that we will see time and again with the monarch butterfly: the teleological argument for God. There are a number of teleological arguments, I outline the more familiar ones here in my defense of Paley’s watchmaker argument, but I think the simplest, and one that fits best here is by Aquinas in his Summa Theologiae[2]. His argument focuses on the guidedness of nature. He points out inanimate, or non-designed objects cannot tend toward a particular purpose or outcome unless some intelligent agent with that particular purpose arranges things, and sets things in motion to achieve that goal. The example he uses is the arrow. It is an inanimate, unthinking object which cannot hit the target unless an archer arranges it to do so by shooting it with skill and precision at the target.

Note, that according to evolution, every creature, indeed all that exists has arisen from inanimate, non-guided processes, so they should not tend toward any goal. Yet we see the egg tending toward a number of goals: To keep the egg moist and alive and attached to the milkweed leaf. And why the milkweed plant? One possible reason among others: because the leaf contains:

“…cardiac glycosides that are progressively assimilated by the caterpillar tissues, which let them … acquire a disgusting taste that prevents them to be predated. This taste will last during their adult phase.”[3]

And I haven’t even mentioned the beauty in the transparent dome shaped egg.

Monarch caterpillars take on a distinct black, white and yellow striped appearance that predators associate with the disgusting taste that helps prevent predation. Interestingly Pam points out only the black portion is exoskeleton. The yellow and white you see on the caterpillar are the internal organs seen through transparent portions of the skin. 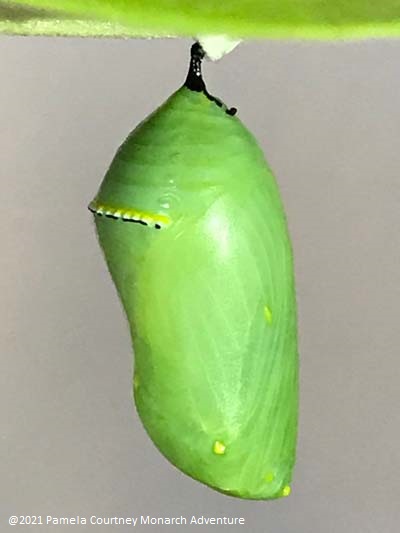 At the proper time, after the caterpillar has eaten enough to make the transformation, it forms a green chrysalis and the metamorphosis to a butterfly begins. The caterpillar contains two types of cells: larval cells, which is what all its organs are made out of as a caterpillar; and imaginal cells – the cells that will allow it to turn into a butterfly. The imaginal cells will turn into the structures that are non-existent in a caterpillar, but necessary on a butterfly like wings, long articulated legs and sensory structures. The larval cells are consumed and destroyed, while the imaginal cells, often in pairs, develop into their final form. Destroy the wrong cells during the metamorphosis and the creature will die.

So not only are there specific cells with a specific function, but during the transformation, one set of cells are selected to be destroyed through being broken down and re-purposed in the adult creature, while the others are allowed to grow and develop into its final form. Once again, clear purpose with a goal in mind. Another clear indication of design. That is to say nothing of the magic inherent in the transformation itself. 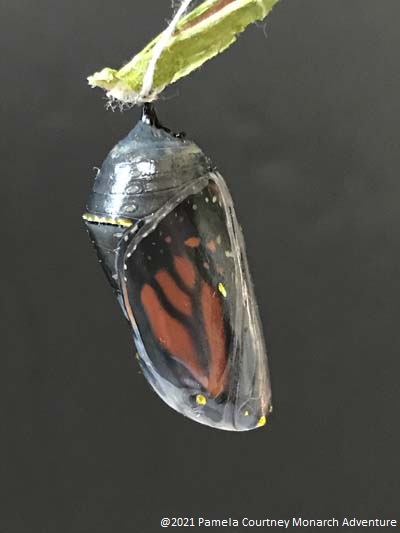 The metamorphosis is a miraculous and complex process.  No one understands how it happens. But I want to focus on one thing here: the color of the chrysalis. For a monarch, it starts green and is transformed into a transparent structure. It appears to be designed to be looked through. But why? I’m reminded of the empty tomb:

“There was a violent earthquake, for an angel of the Lord came down from heaven and, going to the tomb, rolled back the stone and sat on it.”
Matt 28.2

Why was the stone rolled back? It wasn’t to let the Lord of Life out; rather it was to let us humans in to see that Jesus was risen. He was no longer in the grave. It appears to be the same dynamic here. The clear chrysalis is not for the benefit of the butterfly; rather it’s for the benefit of us humans once again to see the beauty of the completed – or nearly completed – transformation and the wondrous thing that the Lord has done. Ditto for the clear egg. (Mark 12.11) This is another teleological argument for design in the monarch.

The glycosides that were mentioned in the caterpillar are transferred to the adult butterfly. So the distinctive coloring of wings indicates to predators, “don’t eat me, I taste terrible.”

Perhaps one of the most well-known facts about the monarch butterfly is the multi-thousand mile migration it makes every year to its warm wintering place. Here’s another curiosity. How does a tropical butterfly wind up living in the cold climates of the northern U.S.? Evolutionists will claim it evolved the ability to do the migration. That is an absolute impossibility. Here’s why.

Monarchs born during the mating season (April to August) live only 2 to 4 weeks. Too short a time period to make the 3,000 mile flight. But those born after that – the last generation late in August – are able to live up to 9 months. This is long enough to make the migration there and back again. How are they able to do that? (It’s a problem for secular biologists notes professor of zoology and entomology Thomas Emmel.[4]) It’s genetically programmed. Maturation of the reproductive organs is stopped and all energy is redirected to allow the longer life span. Butterflies born in this time frame are know as the Methuselah generation. (See Gen 5.27) Question for evolutionists: How does evolution program a “Methuselah” generation? And why can’t humans do it – evolve to live nine times as long?

And with its focus on reproduction and “the selfish gene” as Dawkins calls it (a nonsense concept – and a contradiction to evolutionary theory – genes cannot and do not have purpose or goals – selfish or otherwise), why would reproduction be paused? That can only be done by someone with a purpose (again the teleological argument) who knows reproduction is no longer needed, and what’s needed next is the ability to make the migration.

And now, perhaps the biggest question after that of the metamorphosis. How are monarchs able to make the migration? Recall, those who make the trip south have never done so before. It was butterflies a few generations before them that had returned for the warm months to reproduce. How can the grandchildren or great-grandchildren navigate to such specific spots, even specific trees annually from thousands of miles away, having never been there before?

Regardless of how they do it, whether it’s monarch butterflies or birds or fish or eels, the point Aquinas makes is the same. In migration, these creatures are tending toward a goal.  The how is unknown, but the thing that is important is the why. Why do they tend toward that goal? Remember, evolution cannot purpose to do anything. Rather, it’s as Aquinas points out: for the same reason an arrow tends toward the target. Because the archer caused the arrow to do so. Likewise for these butterflies: their creator, the Lord Jesus, has caused them to fly (in passing flight is another miracle in itself), to migrate to the goal they need to reach, and to do so using means we can’t even understand.

From beginning to end the life of the monarch butterfly holds mysteries, miracles and wonders. Upon pondering these, anyone with eyes to see should truly praise the creator of heaven and earth.

Monarch butterflies are truly a marvel of God’s creation. Are you ready for a Monarch Adventure?

3. Irene Lobato Vila, “Migration in Danger! The Disappearance of the Monarch Butterfly”, 5/7/2015, https://allyouneedisbiology.wordpress.com/tag/methuselah-generation/
Back