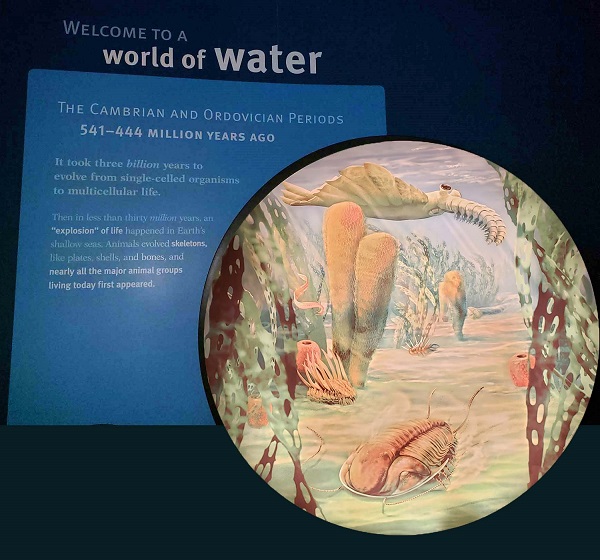 Christians are called to make “the most of every opportunity, because the days are evil.” (Ep 5.16) February 12, Darwin’s Birthday, has become a great opportunity to do that. Like Halloween has become an opportunity to give people gospel tracks when they come to your door asking you for stuff, the day some are celebrating Darwin and evolution is the perfect opportunity to offer them the red pill by suggesting they question evolution on Question Evolution Day. If they’ve never heard about it, point them to Cowboy Bob’s page here to show them it’s a real thing, then go on to present them questions and evidence that will help them to see just how wrong and meritless Darwin’s theory of evolution is. Here at Rational Faith, we’ve been doing that for the past few years since hearing of it.

So for this year’s Question Evolution Day informational giveaway we’ll take a brief look at one of the problems Darwinian evolution has with what’s known as the Cambrian explosion. There are a number, but to keep it somewhat brief, we’ll focus on just one of the numerous issues.

The Problem of the Cambrian Explosion

Paleontologist and celebrated evolutionist  Stephen Jay Gould, co-author of the evolutionary theory of “Punctuated Equilibrium”, is quoted as saying:

“Nothing distressed Darwin more than the Cambrian explosion” [1]

Why would that be? To understand, you must first understand one of the main tenets of Darwinian evolution. Respected evolutionist Ernst Mayr breaks the tenets down into five statements.  We’ll focus our attention on the third statement. Mayr states it succinctly as:

“3. The gradualness of evolution (no saltations, no discontinuities)” [2]

A saltation is a jump, a gap in what is supposed to be a very smooth series. According to Darwin, evolution happens by the accumulation of multitudes of very small changes. Since there are many small changes, you should not see leaps from one type of thing to a completely different type of thing. That is a jump or saltation, and is totally outlawed in Darwin’s theory of evolution by natural selection as detailed in his famous 1859 book “Origin of Species.” Even the newer theory of neo-Darwinism, updated to include mutations as a mechanism of change, (something Darwin knew nothing about), still expects the mutations to be small random changes that accumulate and thus you should still see no saltations, no jumps in the record. But that’s not what you find when you look at the fossil record, which believers in Darwinian evolution regard as a reasonably reliable record of history of life on earth. 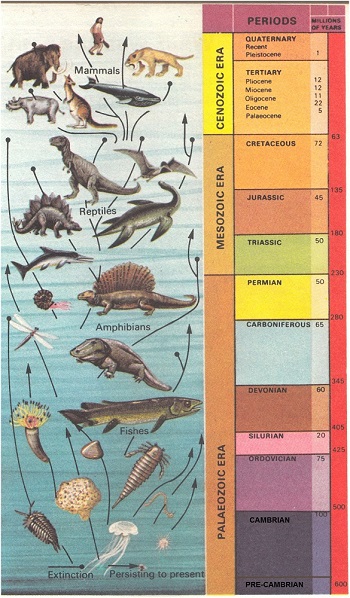 The Geologic column is a construct evolutionists use as an organizational tool. They use it to divide supposed previous eras in earth’s supposed 4.6 billion year history into periods where various types of creatures existed – often in distinct time periods. I call it a “construct” because the complete column, as depicted above or in numerous other depictions with well-defined layers and typical “index” fossils, exists only in museums and evolutionary textbooks. It does not exist as depicted in reality.

In the geologic column, the layers are used to date the fossils, and the fossils are used to date the layers, an obvious and critical logical error I discus in the previous article here but we won’t worry about that now. For now we’re focusing on another error associated with the evolutionary understanding of the geological column. Earth’s history of creatures is supposed to go back millions of years with various creatures during different periods. But note that around the time of the Cambrian period, there is an “explosion” of life evident in the fossil record. Below the Cambrian layer, fossils of any kind are extremely rare. In the Darwinian scheme, “below” is “before.”

The insurmountable problem of the Cambrian explosion

Trilobites, for example, are an “index” fossil for the Cambrian. If you find a trilobite fossil it is supposedly from the Cambrian period which occurred some 500 to 600 million years ago. But trilobites are very complex creatures.

“The biological structure of a Cambrian trilobite was as complex and sophisticated as a modern crab. Its organs included a brain, gut, heart and compound eyes.”[3]

And the compound eyes are among the most complex found in any creature, anywhere, at any time. So trilobites are not simple creatures. They’re very complex. And they appear in the lowest, and thus supposedly oldest, Cambrian layers supposedly containing the simplest creatures. They appear without precursors, without forerunners, without transitional forms below them. They just appear. In terms of Darwinian evolution, that’s impossible. This is what troubled Darwin. It’s also what falsifies his theory as I point out here. In fact, in his “Origin of Species” Darwin laments,

“Consequently, if the theory be true, it is indisputable that before the lowest Cambrian stratum was deposited long periods elapsed, … and that during these vast periods of time, the world swarmed with living creatures. …

To the question why we do not find rich fossiliferous deposits belonging to these assumed earlier periods prior to the Cambrian, I can give no satisfactory answer.” [4]

“…I believe the answer mainly lies in the record being incomparably less perfect than is generally supposed.”[5]

Darwin could get away with that in 1859. But it’s been more than 150 years during which paleontologists and others have been digging up fossils and examining the fossil record. And still, after all this time and research, no indication of the many numerous transitional forms needed to validate his theory that Darwin expected would be found. But now, it’s more than just lack of evidence of transitional forms. Discoveries in China have demonstrated the fossil record is not incomplete in a manner that will save Darwin’s theory. Rather, it’s replete with fossils that destroy Darwin’s theory

The Chengjiang Fossils of China 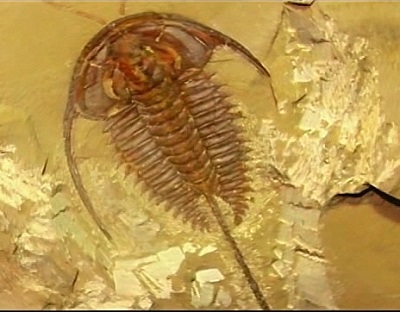 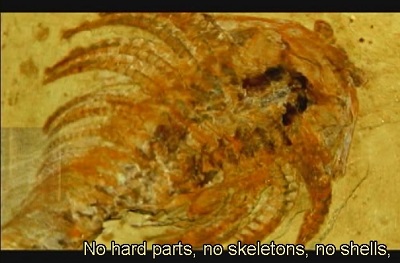 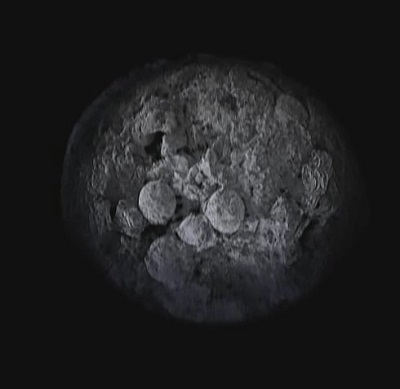 “No hard parts, no skeletons, no shells, just soft-bodied, and yet they’re exquisitely preserved.”[6]

So near Chengjian, China are fossils of both hard-bodied and soft-bodied creatures. Those finds include fossils of embryos of sponges found below the Cambrian layer. So even something as small, soft and fragile as an embryo has been preserved in the fossil record. “Signature in the Cell” author Stephen Meyer sums up the significance:

“If these lower strata can preserve an embryo, If they can preserve a soft microscopic embryo, then why couldn’t they have preserved a larger ancestral forms that supposedly evolved into the Cambrian animals? In other words, if you can preserve something as fragile as an embryo, why couldn’t you in the same strata of rock preserve the immediate ancestor of a hard-shelled trilobite?”[7]

Darwin claimed the fossil record was incomplete. With the find of the Chengjiang fossils, it’s clear the problem is not that the fossil record is incomplete. The problem is that Darwin in particular, and evolutionists in general, misunderstand what the fossil record represents. The fossil record and the geological column are not a record in fossils of creatures over supposed millions of years. The fossil record represents creatures rapidly buried in the flood of Noah’s day. (Rapid burial is the only way you get a fossil. Otherwise natural processes – predators, etc. destroy the carcass.) And they were buried in the order of their proximity to waters (the flood started with the breaking open of the “fountains of the great deep” – Gen 7.11) and their mobility and ability to escape rising flood waters.

Note the order of burial in the Geologic column above (starting from the bottom): Fish, Amphibians, Reptiles, Mammals and (not depicted) Birds.  Fish, being in the water when the catastrophe started are obviously going to be buried first. They can’t escape being in water, so there’s no where for them to flee to. Next, creatures who live part-time in water – amphibians are next. Next, the less agile slower reptiles are buried followed by the faster ones. Finally the agile mammals, and lastly, birds which could fly presumably until they found no place to land, as the waters completely covered the earth. With no place to land the birds were finally overtaken by the waters and forced down due to sheer exhaustion. This is a consistent explanation of the fossil record within the creationist worldview.

4. Charles Darwin, The Origin of Species by Means of Natural Selection, Sixth London Edition, with all Additions and Corrections, First published 1859; This edition published by Enhanced Media ,  p. 292 Kindle Loc 5212
Back

6. Jonathan Wells, ref. from “Darwin’s Dilemma:The Mystery of the Cambrian Fossil Record“
Back

Thanks for an excellent article and the link. I like your use of red and blue pills. (What if I told you that Morpheus never said “What if I told you”, but that’s what the “meme” demands?) I’ve seen anti-creationists wave off the Cambrian explosion, saying things like, “Big deal. Lots of fossilized simple organisms.” Do they even understand science, and the importance of the Cambrian? Of course, there are some that are compelled to contradict anything a creationist says, no matter how foolish they look. I’ll be scheduling this article to post in a few hours, and reminding people… Read more » 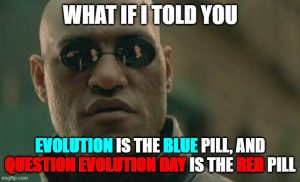 Isn’t it amazing how many people who claim to “follow the science” neither follow it, nor even understand it?

Forgot to mention that Gould and Eldridge knew that neo-Darwinism had no evidence to support it, so they dusted off Goldschmidt’s “Hopeful Monster” idea, retooled it a bit, and gave us “punctuated equilibrium.” Essentially, saltation. Sure, why not trade one version of the story for another, equally without substantial evidence?

It always amazes me that people think that “punctuated equilibrium” is a viable theory. If the basic theory doesn’t work, (which by their own admission it doesn’t – otherwise they wouldn’t need a new theory) because not only does the evidence not support it, but also because it has no mechanism to make it work, how can creating a new theory that breaks a main tenet – no saltations – no jumps – supposed to work? Not only does the new theory break that tenet, but it claims the theory works in the complete opposite manner – quickly after a… Read more »

Let’s just stop the nonsense with these hardened atheists pushing their evolution cartoons. They are mentally ill when they reach the level of a teacher and already the soul turned over to the dark side as they have zero natural scientific evidence and especially the fossil record and the written record of mankind to where there should be a law if they are so stupid to continue to ignore history and the fossil record which includes only facts diametrically opposed to evolution maybe we should throw them all in FEMA camps because atheists are a danger to society and the… Read more »

I agree that hardened atheists (and evolutionists) spout nonsense and have zero scientific evidence for their evolutionary beliefs. I think you’re being facetious about putting them in FEMA camps (at least I hope you are!). As for dinosaurs, I believe there is ample evidence for their existence – both in the Bible (see Job 40.15-24 for Behemoth; Job 41.1-34 for Leviathan) and in the fossil record. See my article “A Dinosaur by any other name …” which lists a number of dinosaur sightings. They use the flying spaghetti monster to mock God and religions, but in so doing ignore the… Read more »