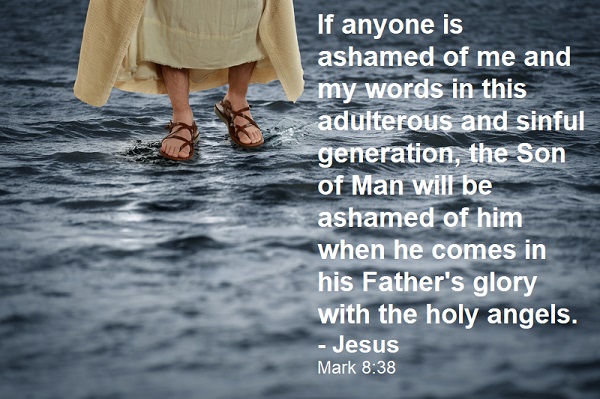 April 14th has been declared “National Not Ashamed of Jesus day.” Dr Michael Brown has been promoting the day on a number of sites like The Stream as well as the site for the event: notashamedofjesus.org, so consider this a Public Service Announcement to help spread the word.

And since this is essentially a PSA, with the event info given in detail in the above articles I will simply give the basics about the event followed by scriptures that command or encourage the followers of Jesus to share the faith, not be and ashamed, and recall that we are called to be witnesses.

“For if you remain silent at this time, relief and deliverance for the Jews will arise from another place, but you and your father’s family will perish. And who knows but that you have come to royal position for such a time as this?”

I don’t think any Christian would doubt that this crumbling society needs the testimony of Jesus. A revival wouldn’t hurt either. But the goal is much more humble than revival: The goal is simply to use every God-honoring way you can think of to lift the name of Jesus before the people in your circle – people who you regularly come into contact with. Make sure they know you’re a believer in Jesus and, if you get the opportunity, share the gospel. Here’s the graphic of a few ideas shared on notashamedofjesus.org. 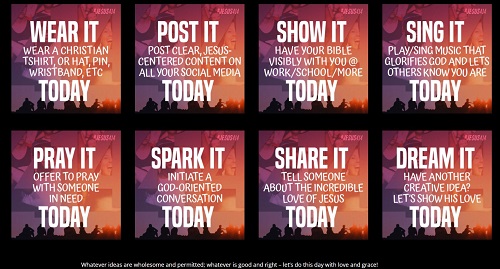 And with that intro, I’ll share some scriptural instructions and exhortations that support the idea behind this day.

If anyone is ashamed of me and my words in this adulterous and sinful generation, the Son of Man will be ashamed of him when he comes in his Father’s glory with the holy angels.
Mark 8.38 (see also Luke 9.23-26)

For I am not ashamed of the gospel, because it is the power of God that brings salvation to everyone who believes: first to the Jew, then to the Gentile.
Rom 1.16

We have been sent as witnesses

After this the Lord appointed seventy-two others and sent them two by two ahead of him to every town and place where he was about to go. He told them, “The harvest is plentiful, but the workers are few. Ask the Lord of the harvest, therefore, to send out workers into his harvest field. Go! I am sending you out like lambs among wolves.
Luke 10.1-3

But you, keep your head in all situations, endure hardship, do the work of an evangelist, discharge all the duties of your ministry.
2 Tim 4.5

But you will receive power when the Holy Spirit comes on you; and you will be my witnesses in Jerusalem, and in all Judea and Samaria, and to the ends of the earth.”
Acts 1.8

Then Jesus came to them and said, “All authority in heaven and on earth has been given to me. Therefore go and make disciples of all nations, baptizing them in the name of the Father and of the Son and of the Holy Spirit, and teaching them to obey everything I have commanded you. And surely I am with you always, to the very end of the age.”
Matt 28.18-20

“You are my witnesses,” declares the Lord,
“and my servant whom I have chosen,
so that you may know and believe me
and understand that I am he.
Before me no god was formed,
nor will there be one after me.

I, even I, am the Lord,
and apart from me there is no savior.

I have revealed and saved and proclaimed—
I, and not some foreign god among you.
You are my witnesses,” declares the Lord, “that I am God.”
Is 43.10-12

From one man he made every nation of men, that they should inhabit the whole earth; and he determined the times set for them and the exact places where they should live.
God did this so that men would seek him and perhaps reach out for him and find him, though he is not far from each one of us.
Acts 17.26-27

When Esther’s words were reported to Mordecai,  he sent back this answer: “Do not think that because you are in the king’s house you alone of all the Jews will escape. For if you remain silent at this time, relief and deliverance for the Jews will arise from another place, but you and your father’s family will perish. And who knows but that you have come to your royal position for such a time as this?”
Esther 4.12-14

Remind the people to be subject to rulers and authorities, to be obedient, to be ready to do whatever is good,
Titus 3:1

And I’ll close with a reminder that, even if we fall, we are to get up and continue to strengthen our brothers and sisters and witness to the world:

If you fall, get up and keep going:

“Simon, Simon, Satan has asked to sift all of you as wheat. But I have prayed for you, Simon, that your faith may not fail. And when you have turned back, strengthen your brothers.”
Luke 22.31-32

Are you ready to allow the world to see that you stand unashamed for Jesus, ready to strengthen your brothers and sisters, ready to tell the world Jesus Christ is not only Lord, he’s my Lord?