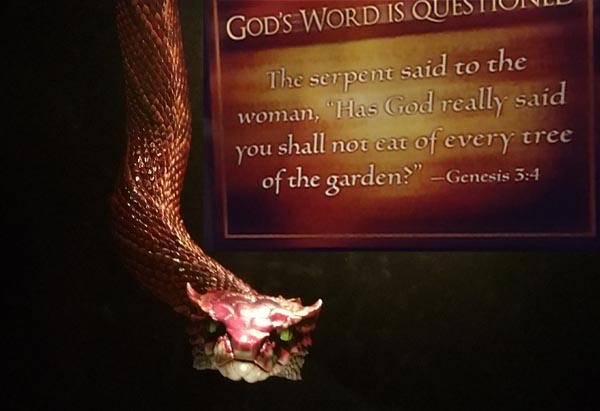 This should be obvious, but to clarify, there’s a saying that has been going around online, at least on Twitter, that imparts a valuable piece of wisdom: “Only a fool would allow his enemies to educate his children.” 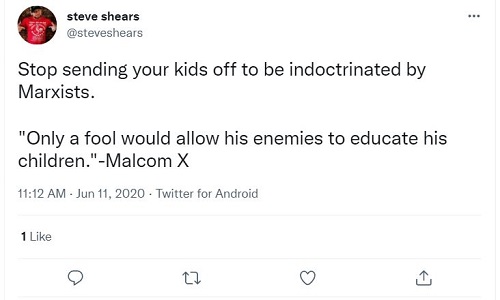 The wisdom there is obvious. Clearly you don’t want someone opposed to your belief system to instruct your kids on what is true and what is false. What Christian church would allow an avowed Satanist to teach Sunday school? We will use that same wisdom, that same insight, to debunk the following objections to Christianity found also online: 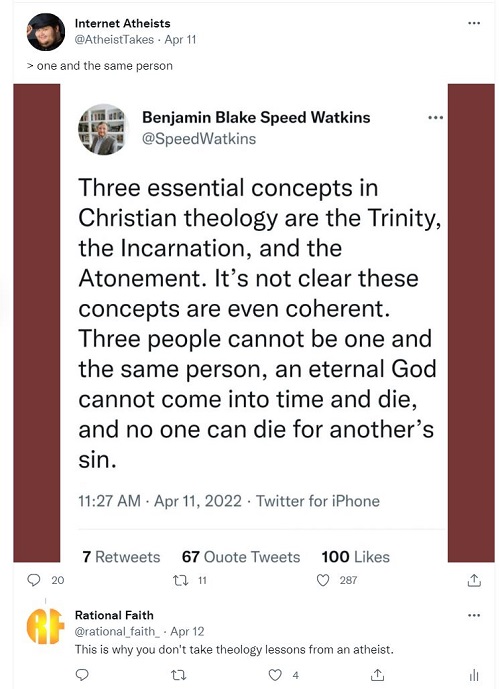 So this apparent atheist Ben Watkins (atheist – based on his clearly atheistic positions and the fact that he hosts “@RealAtheology) questions  these three fundamental truths about Christianity:

The Trinity
The Incarnation
The Atonement

He is affirmed by another atheist going by the name of @InternetAtheists. I will not do an in-depth exposition of these doctrines here on why the atheists are wrong because I’ve already done that in my five-part series on “Knowledge of the Holy One” (The title references Prov 9.10; 30.3), which starts with part 1 “Jesus the Holy One Revealed” and covers all these topics. Here I will merely give a brief response using logic – which atheists are supposed to be good at – before moving on:

Re: The Incarnation
There is nothing logically inconsistent with an eternal God entering his own temporal creation. There is also nothing inconsistent with the human messiah dying (both physically – his body died, and spiritually – he was separated from God while he hung on the Cross (“My God, my God, why have you forsaken me?” –  Matt 27.46) These are concepts an atheist is probably not familiar with. If atheists claim to know the incarnation is not possible, they are simply making another appeal to ignorance. How can they know what’s possible or impossible for an omnipotent God whom they deny exists? So again, you don’t want to get your theology from an atheist.

Re: The Atonement
His statement “no one can die for another’s sin” is both a fallacious appeal to consequence (he clearly doesn’t like that someone can). It’s also a fallacious appeal to authority. Has he made the laws – moral and otherwise – that govern the universe? Does he appeal to the person who claims he has (that would be God). Both answers are no and thus he has no qualified authority to backup his claim. So here the atheist is like Satan, wanting to play God (Is 14:12-14) and appeal to his own authority to determine what is and is not allowable; he wants to determine what is justice and what is not. But he has no logical basis for doing so. (Or any other basis for that matter.)

Satan was cast out of heaven for his blasphemous arrogance and pride in wanting to “… ascend above the tops of the clouds; I will make myself like the Most High.” (Is 14.14) Since the atheist is likewise not God, he has no authority to say if an atonement is possible or not, and what will or will not suffice for an atonement if it is possible. If he wants to appeal to some concept of “justice” the question is then, what “justice?” Atheist high priest Richard Dawkins says “The universe we observe has precisely the properties we should expect if there is, at bottom, no design, no purpose, no evil, no good, nothing but blind, pitiless indifference.” If there is no good or evil and only indifference, then clearly there can be no “justice.”

If any atheist continues with such pretensions and arrogance of knowing better than God, and denying those fundamental tenets of the the faith, they too will be cast into outer darkness and spend an eternity with Satan and the angels who followed him. (Matt 25.41)

But again, the point I want focus on is not the theology, but the foolishness of getting your theology from an atheist or anyone other than a mature, grounded-in-the-faith Christian.

God is not Bound by Theological Misunderstandings

The Ark of the Covenant

After the Babylonians captured the southern kingdom of Judah where the temple of God was located (with the ark of the covenant located in the temple) around 587 BC, the ark disappeared. While there are a number of places that are suspected to be where the ark is currently located[1], no one is sure. Many have sought the ark, thinking they can gain mystical, magical powers from it. As one documentary put it:

“The ark of the covenant is is a golden chest described in the book of Exodus as containing the tablets of stone on which the ten commandments were written as well as Aaron’s rod, a jar of manna, and the first torah scroll. It’s said to possess enormous power–enough to destroy the walls of Jericho and to kill anyone who touches it.”[2]

Why do they believe they can gain magical powers from the ark? Because they misunderstand the accounts of the walls of Jericho falling (Josh 6.1-5) and the account regarding Uzzah, who reached out to steady the ark and was struck down(2 Sam 6.6-7). Since they either don’t know the word of God or don’t believe it, they don’t understand that the walls of Jericho fell because God had announced he would give Jericho into the hands of the Israelites and Uzzah was struck down because sinful man cannot enter the presence of the holy God without the covering of an atonement.

They don’t understand these things in the same way as one who doesn’t understand science might believe it’s magic. But like science, once understood, it is very straightforward: The power behind the ark of the covenant is not magic. It is the power of God directed by the will of God. Apart from those things, the ark of the covenant is just another ornate box. Don’t get your theology or your understanding of the ark from those who, like atheists, deny God and believe in magic. That is an obvious and grave mistake.

The Spear of Destiny

But when they came to Jesus and found that he was already dead, they did not break his legs.
Instead, one of the soldiers pierced Jesus’ side with a spear, bringing a sudden flow of blood and water.
John 19.33-34

The spear thrust into the side of Jesus to prove he was dead is known as “The Spear of Destiny.” Like the ark, it is supposed to contain enormous power:

“The spear of destiny is said to be none other than the spear which had pierced the side of Jesus Christ as he hung on the cross. Myth says it was wielded by a Roman centurion named Longinus.”[3]

Legend also says the blood from Christ dripping down the spear fell on Longinus eye, which had a cataract, and was instantly cured.

The spear later comes to the emperor Charlemagne:

“Charlemagne carries it into battle. He’s invincible as long as it’s in his hands.”[4]
Sidney D. Kirkpatric

“It becomes a talisman for conquerors for military force. It is a military image that it has of vanquishing foes.”[5]
Robert Feather

Thus the legend is born which Hitler foolishly believed so he connived and stole his way into gaining the spear. Obviously it didn’t help Hitler. The allies won in spite of Hitler possessing the spear.

Theology is not Fiat Magic

Any Marvel fans out there? Remember the scene from the first Thor movie:

Thor acts foolishly, and his father Odin, head of the Norse pantheon, is disgusted and banishes Thor and strips him of his powers. Then, in his anger,  he enchants Thor’s hammer saying:

“Whosoever holds this hammer
If he be worthy, shall possess the power of Thor.” 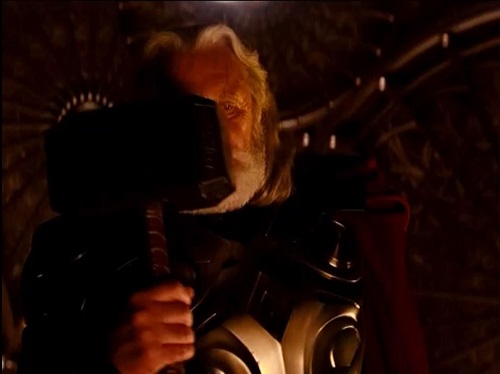 Atheists apparently believe in making theological statements the way Odin enchants Thor’s hammer: by fiat. They simply make a statement and expect it to be true.

So, just as you don’t want Satanists teaching Sunday school, don’t get your theology from atheists– particularly atheists who act like they have the power of the false god Odin to make false fiat statements about that which they deny. Instead, go to the source which is the word of God as recorded in the Holy Scriptures.

A final thought: scripture warns against getting advice from mediums and spiritists. The same warning goes for getting theological advice from  atheists:

“When men tell you to consult mediums and spiritists, who whisper and mutter, should not a people inquire of their God?”
Isaiah 8.19

1. Suspected locations of the Ark of the Covenant:

2. Forbidden History – “The Real Ark Of The Covenant”, AHC documentary, 2015
Back

3. (Narrator) Myth Hunters: “Hitler and the Spear of Destiny”, Documentary, 2012
Back

5. Robert Feather, Author, A Clash of Steal, Ref from:
Myth Hunters: “Hitler and the Spear of Destiny”, Documentary, 2012
Back

The Serpent in the Garden – from The Creation Museum, KY – Picture © Duane Caldwell